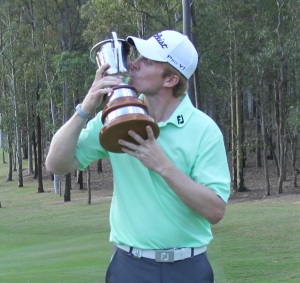 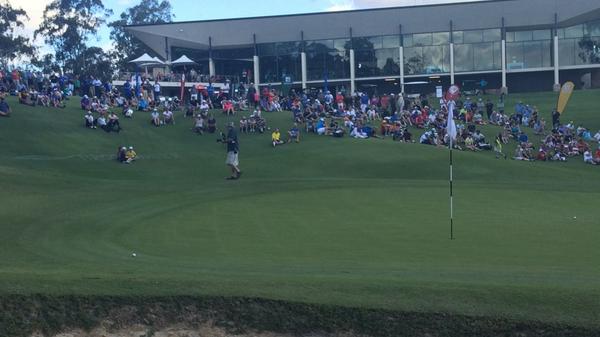 Aug. 31, 2014
Bond's tee shot perfect down the middle. His second shot ends just off the green but still a make-able shot for birdie.

Matthew Toomey
@icestorm77
BIRDIE FOR DODT ON 18! He leads by 1. Bond must birdie 18 for a play off. @IsuzuQldOpen #QLDopen http://t.co/SYXufP3SAN 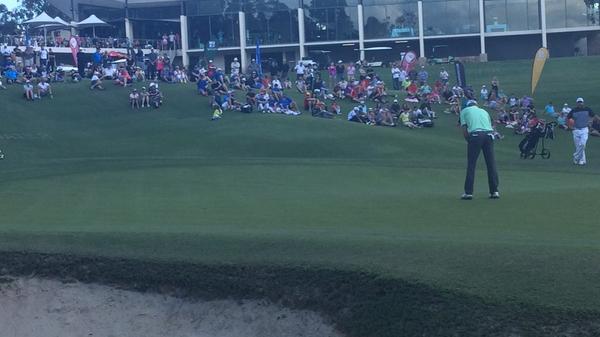 PGA of Australia
@PGAofAustralia
On 18 Dodt has a 4m putt up hill for birdie, would take his lead out to two shots. #QLDOpen
Aug. 31, 2014

PGA of Australia
@PGAofAustralia
Dodt is dead center of the fairway on the 18th and about 145 out from the green. #QLDOpen
Aug. 31, 2014

PGA of Australia
@PGAofAustralia
Dodt makes birdie on the par-5 17th and takes the outright lead at 6-under. Bond has a 25 feet eagle putt on 17 to reclaim it. #QLDOpen
Aug. 31, 2014
Sunday 31st August 2014, 3.15pm - 17th holeTee shots from Griffin and Bond both find the fairway.Bond goes at it with a fairway metal and has gone right of the flag. He is on the back of the green where the pin is and will have 25 feet putt for eagle.Griffin's second shot unfortunately finds the water. He has taken a drop but hasn't found a particularly good lie for his 4th shot. His 4th shot went into the bunker he chips out close to the hole with his 5th. Griffin misses his bogey putt and makes double on 17 to drop him out of the race. Meanwhile Bond's eagle putt shaved the hole. He has a short 6 inch putt for birdie which will tie him with Dodt. Bond makes his birdie putt and heads to 18 tied for the lead with Dodt.

Matthew Toomey
@icestorm77
Water for Griffin on 17. Game over. Bond on the green in 2! @IsuzuQldOpen #QLDopen http://t.co/4DjMO5kZ0A 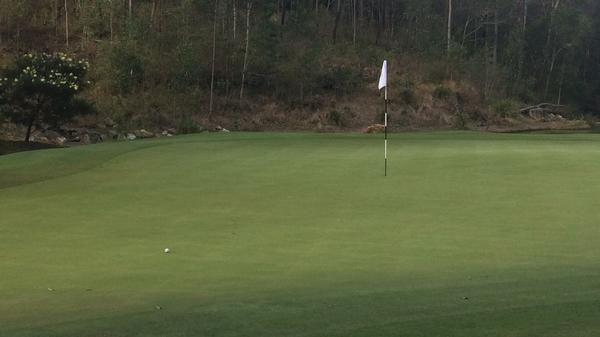 PGA of Australia
@PGAofAustralia
Dodt looking at a 4m eagle putt on 17 and the outright lead. It's all happening @BrookwaterGolf1 #QLDOpen
Aug. 31, 2014

Matthew Toomey
@icestorm77
Dodt on the green in two at 17th and will be putting for eagle and the lead! @IsuzuQldOpen #QLDopen http://t.co/BFo84MzSy3 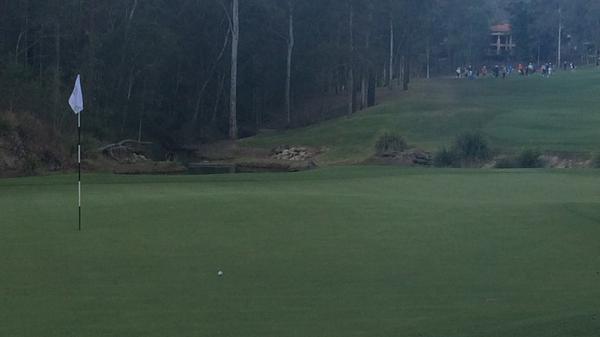 PGA of Australia
@PGAofAustralia
Wow! Wow! Wow! Griffin and Bond both bogey the 16th. We have a three-way tie at 5-under with the pair joining Dodt. #QLDOpen #Intense
Aug. 31, 2014

PGA of Australia
@PGAofAustralia
If required the par-4 18th at @BrookwaterGolf1 will be our playoff hole. It has been the hardest hole on course this week! #QLDOpen
Aug. 31, 2014
Sunday 31st August 2014, 2.51pm - 16th holeGriffin's tee shot was on line to the flag but pulls up short. He has 25m for birdie. Bond's tee shot goes long, ends in the back right corner of the green. He has two long putts for par.Griffin and Bond both leave their parr putts short of the hole and make bogey. Just like that we have a three way tie for the lead at 5-under! Griffin, Bond and Dodt all battling the the title!

PGA of Australia
@PGAofAustralia
While all eyes are on Griffin and Bond, Dodt has just made a birdie on 15 to go to 5-under just one back of the lead. #QLDOpen
Aug. 31, 2014 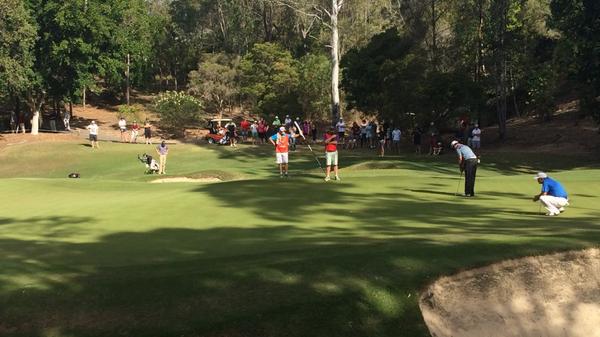 Aug. 31, 2014
Sunday 31st August 2014, 2.32pm - 15th holeTee shots on 15 look good. Griffin is on the left hand side of the fairway but advantage to Tom Bond who is clear down the middle with a clear line to the flag for his second shot.Approach shot from Griff was short right,  playing into breeze. He chipped on to the green 4 feet past the hole and has that for par. Bond second from the fairway was all over hole but came up short. He has 6-7 m putt for birdie. Bond has a weak bride effort and comes up short, he taps in for par. Griffin makes his par putt to keep things tied heading to 16.Sunday 31st August 2014, 2.32pm - 14th holeBond get's lucky on his tee shot which missed left and looked likely to bounce off the fringe and into the hazard. Instead it skipped back onto the fringe and he makes par. Griffin plays a nice tee shot and is safely on the back tier of the green and makes a safe par. Lead remains locked between Griffin and Bond on 6-under Sunday 31st August 2014, 2.07pm - 13th holeLooking like another change of the lead here on 13.

Both Brown and Bond found the right hand fairway bunker with their tee shots. Both splashed out  only to advance by 50m.

Brown has hit third shot through back of green while Bond still has 100m to pin after 3 shots.

Griffin in middle the of fairway for two. Griffin hit his third over the pin with lots of spin. He now has an uphill putt of 6m for birdie. Bond has 3m putt to make par. Bond misses par putt and makes bogey. Griffin also misses birdie putt but makes his par. They are now tied at 6-under and two clear of Andrew Dodt. Sunday 31st August 2014, 1.59pm - 12th hole

Matt Griffin’s tee shot went right into the fairway bunker but he has played a great recovery shot. Using the slope on the right hand side of the green he has a good look at a birdie putt.

Tom Bond played a beautiful tee shot into the middle of the fairway and has the best angle into the pin which is tucked 4 from the edge of the green. His second shot looked good but sucked back leaving him about 15-16 foot putt for birdie.

Griffin rolls his birdie putt 6 feet past the hole. He also misses his par putt which hands Bond the outright lead heading to the 13th

PGA of Australia
@PGAofAustralia
And here we go...back 9 on Sunday and @TomBond_Golf opens with a bogey on the 10th. @MattGriffinGolf pars and we are all tied at -7 #QLDOpen
Aug. 31, 2014

Tom Bond is maintaining his composure after his bogey on the 5th. He has made par on the next two holes to maintain a two shot lead.

After six straight pars Andrew Dodt birdies the par-5 8th to be outright third on 4-under the card. At the start of the week he was determined to win the Isuzu QLD Open and there is still plenty of time for him to achieve his goal.

Cameron Smith has made the turn at 1-under the card to be T4 with Anthony Brown on 2-under.

After his sensational 30 on the back nine, Viraat has slowed down a little with three straight pars on the front nine.

At the tail end of the field players are finding birdies with Matt Jager 4-under after 9 holes and Rory Bourke is 3-under after 12 holes.

PGA of Australia
@PGAofAustralia
With his eagle on the par-5 13th @Timmyhart89 becomes the 1st player to post a second eagle at the #QLDOpen. His other was on the 1st in R3
Aug. 31, 2014

The first chink in Tom Bond’s armour has surfaced.

Starting the day with a three shot lead and cruising with four straight pars, Bond bogeys the par-3 5th.

He still maintains his lead but now only has a two shot buffer from Matt Griffin.

However this could make him more determined. Yesterday after he made a double bogey on the 13th it motivated him to play better.

A great attitude from the second year, 27-year-old Professional.

PGA of Australia
@PGAofAustralia
Defending champ @nickcullengolf opened with 6 straight pars today. Then in his next 6 holes he has fired 4 birdies to move to T7 #QLDOpen
Aug. 31, 2014
Sunday 31st August 2014, 11.52am

After opening with a double bogey New Zealander Michael Long answered with two consecutive birdies to maintain his place in the top-10.

Another Kiwi playing well today is Ryan Fox. He is 3-under after 9 holes to join Long at T7 on 1-under.

Fox is recovering from a tough 76 in the third round.

But the man really tearing up the golf course is amateur Viraat Badhwar. He makes the turn at 6-under after posting four birdies and an eagle on the par-5 7th.

This kid can seriously play and helped his US College, Stanford, to the semi-finals of the NCAA this year.

It’s an honour roll that reads like the who’s who of Australian golf.

But who will add their name to this list of champions today? 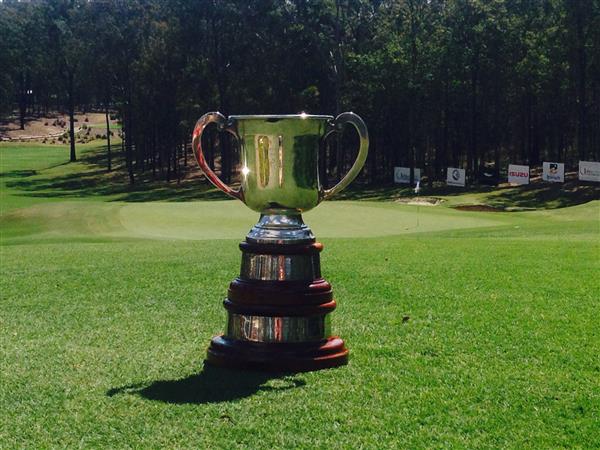 The final group of Tom Bond, Matt Griffin and Anthony Brown are now on course.

South Australian Bond starts with a three shot lead but with this being the first time he has led a PGA Tour of Australasia tournament into the final round it will be interesting to see what role nerves play for him today.

Griffin is experienced in this situation with five career victories on his resume, two of those coming this year.

Brown is an experienced Tour Pro but is still hunting his first Tour victory.

You can stay up to date with live scores via pga.org.au/scores or download our iPhone app. 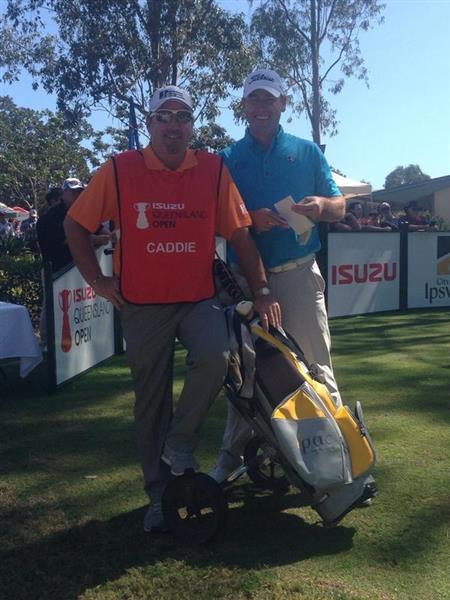 Showing what a test of golf the Brookwater Golf and Country Club is only 16 players have made an eagle this week.

Also interesting to note is no player has made more than one eagle!

The hole most likely to give up an eagle is the par-5 13th. 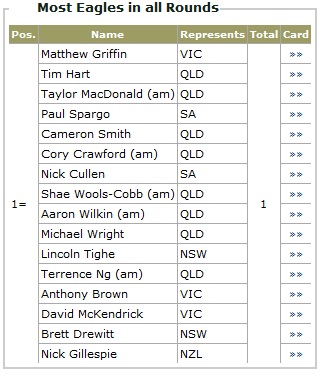 Yesterday the par-4 10th was the hardest hole on the course.

However today our course set up staff believes this hole will provide good birdie opportunities if the players use the contours of the green to their advantage.

Yesterday the par-5 8th hole provided the most birdie opportunities with 22 players capitalising on the opportunity.

Welcome to the final round of the Isuzu QLD Open being played at Brookwater Golf and Country Club.

We are set for an exciting day of golf as we watch to see who will claim the T.B. Hunter Cup.

Tom Bond starts the round with a three shot lead from Matt Griffin. There is a further 11 players within seven shots of the lead.

Teeing off at 8.45am here are some groups to watch…

For a recap of all the round 3 action check out yesterday's State of Play.