PGA of Australia
@PGAofAustralia
That’s a wrap from RND 1 of #FijiIntl now time for the pro’s to appreciate #Fiji in other ways http://t.co/yXlTwYDCIu 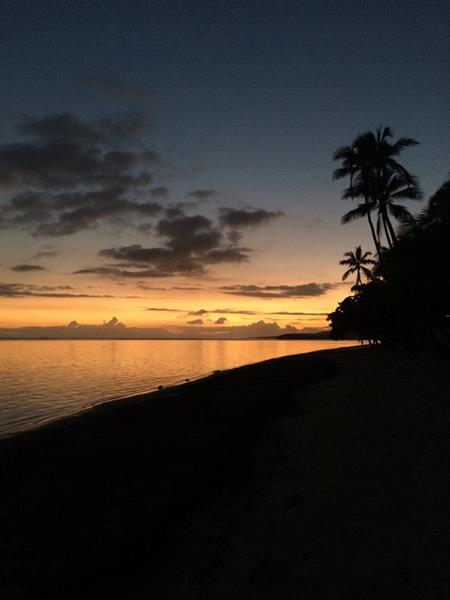 At the end of Round 1 seven players are tied for the Fiji International lead.

Australians Stephen Dartnall, Rhein Gibson and Jason Scrivener as well as China’s Minghao Wang took advantage of the early morning conditions to fire rounds of 4-under 68. Following the afternoon’s field they were joined by Australians Andrew Dodt, David McKenzie and Jake Higginbottom. The leaderboard congestion extends to the chasing pack where 10 players are just one shot back of the lead at 3-under the card and tied 8th.

Not enjoying his first round as much was tournament drawcard Vijay Singh who finished at 1-over the card to be tied 55th on the leaderboard. Playing in conditions severely different to that experienced in the practice round Singh found it difficult to get a handle on the greens.   “It was an interesting round; I don’t know when I last had three doubles (bogeys) in a round of golf,” said Singh. “I am getting the hang of it but it’s hard to get the pace of the greens and the wind is in a totally different direction. I think that affected everybody.” “It (the course) played a lot easier, I am very disappointed in my round, the way that I scored but there is three days to go.” Zimbabwean Nick Price, playing in the afternoon field, also finished at 1-over the card but will look to take advantage of his early tee time tomorrow. The second round of the Fiji International tees off at 6.35am tomorrow with Price teeing off at 7.35am while Singh will be on course at 12.05pm. For all round 1 scores please click here. For all round 2 tee times please click here. 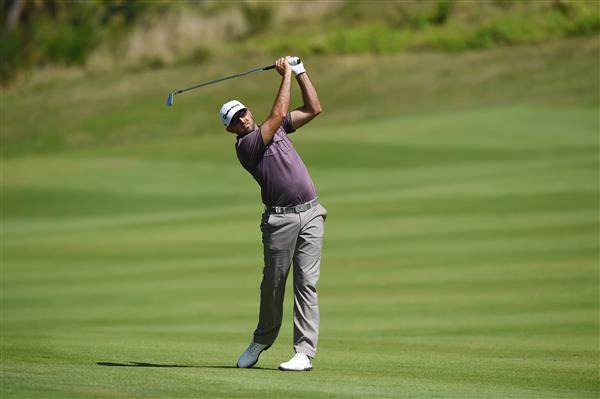 Rhein Gibson, one of seven Fiji International leaders after Round 1 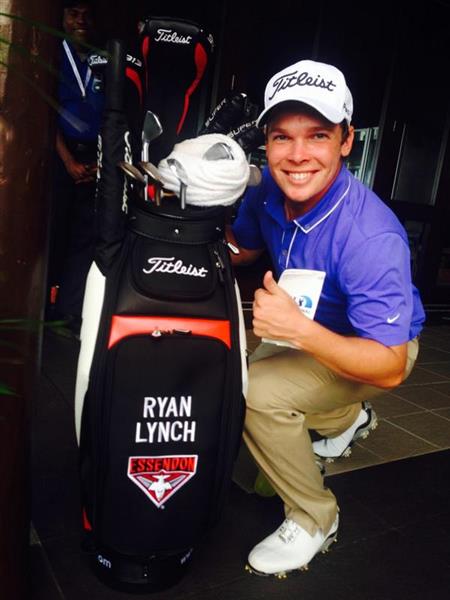 After hitting into the corporate hospitality area on 18, David McKenzie surrendered his outright lead with a bogey on the final hole.

Finishing tied with a pack at 4-under par, McKenzie was understandably disappointed to finish the way he did, however positive about his overall performance.

10 players are currently tied for the lead at 4-under par including Stephen Dartnall, Andrew Dodt, Stephen Leaney and Jake Higginbottom.

At current, thirty two players are within two shots of the Fiji International lead with the wind yet to play a significant role in the scores.

OneAsia
@OneAsiaGolf
Higginbottom (-4) 'If I win here it would be nice & it couldn't be a better place to do it!' #FijiIntl http://t.co/Z4r0POJBgQ 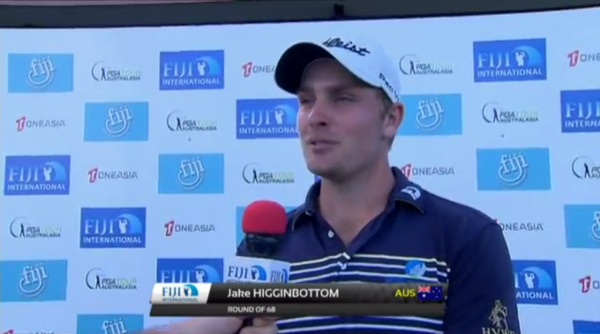 David McKenzie has just taken the outright lead at the Fiji International with a birdie on the par 3 15th hole.

Still bogey-free for the day, McKenzie has birdied two of the three par-3s at Natadola with three holes still to play.

Check out his scorecard below:

Alister Nicholson
@AlisterNicho
How spectacular does Natadola Bay look for the #FijiIntl. Must be an awesome course to play. @PGAofAustralia
Aug. 14, 2014

David McKenzie is the best placed in the afternoon field so far, the Victorian 4-under through 14 and tied for the lead.

McKenzie had a birdie chance to take the outright lead on the 10th hole, but couldn’t convert to lead the tournament as the first round draws to a close.

Young West Australian Brody Ninyette has also joined the leaders at 4-under and is so far bogey-free through 14 holes.

Also still on course, Andrew Dodt, Lucas Lee, Jason Lee and Tommy Kang are a further shot back at 3-under par.

For the full Round 1 leaderboard visit our live scores page. 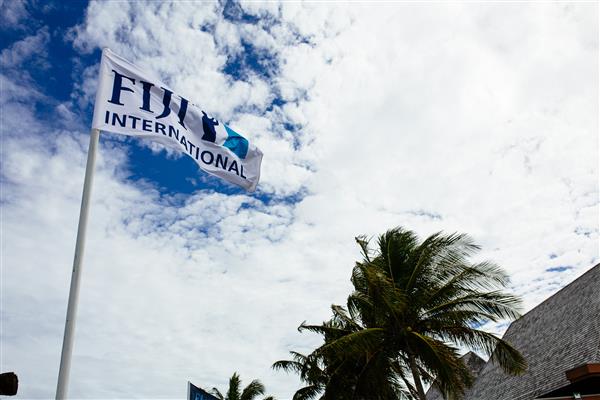 Will the wind at Natadola play a role this afternoon?

PGA of Australia
@PGAofAustralia
Our courtesy car drivers are enjoying the #FijiIntl. For most this is the 1st time they have seen golf! #GrowTheGame http://t.co/9qNKfOmVDD 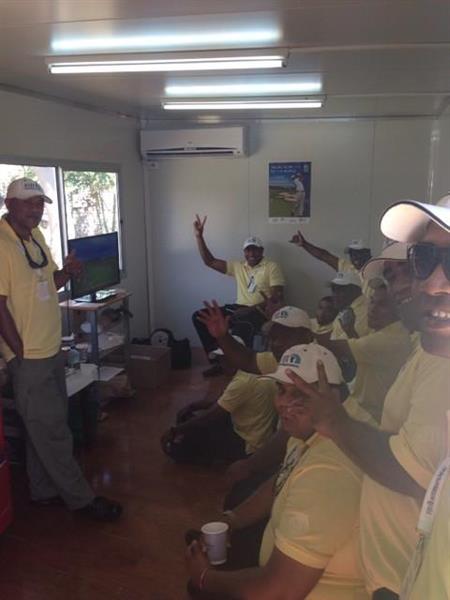 OneAsia
@OneAsiaGolf
Current leaderboard as things stand in Natadola Bay on day 1 of the #FijiIntl -4 predicted by many as a winning score http://t.co/yJlDxlh12X 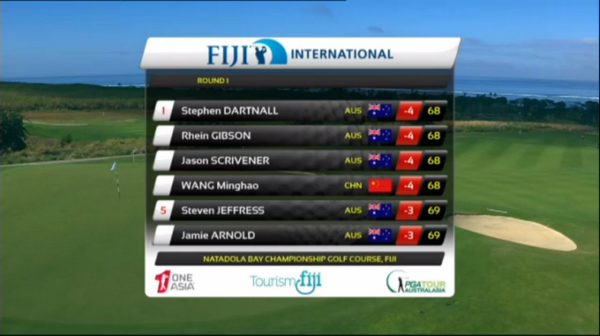 It’s been a tough start for one of the tournament favourites Aussie Matt Griffin.

One of a handful of players in this week’s field to have won on the Natadola Course (Matt claimed the 2009 Fiji Open) Griffin has struggled this afternoon and is currently 4-over through 5 holes.

A two-time OneAsia champion and winner of the Vic Open in February, Griffin has also won the Korea PGA Championship this year and has been in top form heading to Fiji.

He’s playing alongside Nick Price today who is also 4-over.

Meanwhile, three's plenty going on around the golf course with lots of support from the local Fijians.

In particular, the local village of Sanasana has been very supportive, adding unique atmosphere to the tournament. 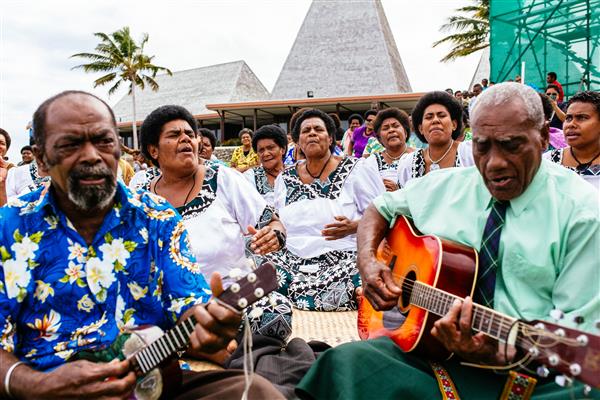 Inside Golf
@InsideGolf
How gorgeous is it in Fiji!!! Wow. We're on site for the #FijiIntl, but there is also great coverage on #foxsports.
Aug. 14, 2014

The afternoon field is now out on course at Natadola which includes Nick Price, Matt Griffin and India’s Anirban Lahiri.

In Fiji after playing the PGA Championship last week, Anirban has started well and is 3-under through 5 holes with birdies on the 1st, 2nd and 5th holes.

Expected to be a real contender this week, Anirban has already claimed a title on the Asian Tour earlier this year and is touted as one of the up-and-comers of Asian golf. 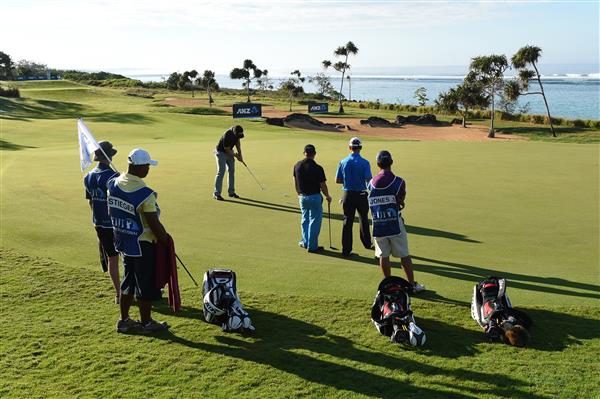 At present, 36 players are currently under par with the wind expected to play a role as the afternoon progresses.

They’re all chasing four players who finished at 4-under after their morning round including Aussies Stephen Dartnall, Rhein Gibson, Jason Scrivener and China’s Minghao Wang.

Warren Smith
@WarrenSmithFOX
What would you give to be playing golf in #Fiji today? Oh well, turn on FS3 and dream. #FijiIntl http://t.co/56mz5xJvSb 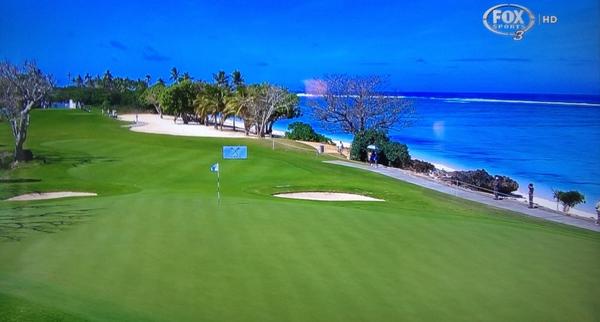 All eyes were on Fiji’s own Vijay Singh this morning who yesterday made it very clear that he’s at Natadola to try and win on the course he designed.

With a strong group of local friends and family following him on day 1, Singh didn’t disappoint despite an up and down round.

With three birdies and a bogey early, Singh looked shaky after the turn when he double bogeyed both the 3rd and 4th holes.

However Singh bounced back immediately with an eagle on the par 5 6th hole and a birdie on the 7th, before coming unstuck on his last hole of the day (the 9th) with another double bogey, finishing his round at 1-over 73.

“I don’t remember the last time I three doubles in a round of golf, but for some reason my driver wasn’t working to what it normally does,” said Singh.

“I’m very disappointed in my round with how I scored, but three days to go, so we’ll see.”

“I don’t remember the last time I three doubles in a round of golf, but for some reason my driver wasn’t working to what it normally does,” said Singh.

“I’m very disappointed in my round with how I scored, but three days to go, so we’ll see.” 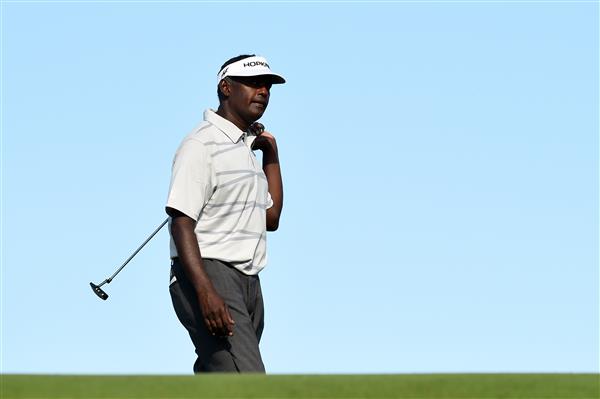 It was a tough first day on course for Vijay Singh

After his 4-under round, Stephen Dartnall is the first player into the Fiji International Media Centre today and was incredibly up-beat about his early morning performance.

“I think we got a bit lucky this morning with the lack of wind out there, it was perfect. It’s just good to take advantage of that,” said Dartnall.

“I putted really well, I did make a few mistakes hitting into greens, missed a few greens but got them up and down. There was nothing really flashy out there just damage control when it was needed.”

“The condition of the course is just sensational,” he added.

“It’s a tough course when it’s calm but when it starts blowing you can see this thing being a beast.”

Planning to take full advantage of this week’s tournament destination, Dartnall says he off to do some snorkelling this afternoon and take in some local sights. 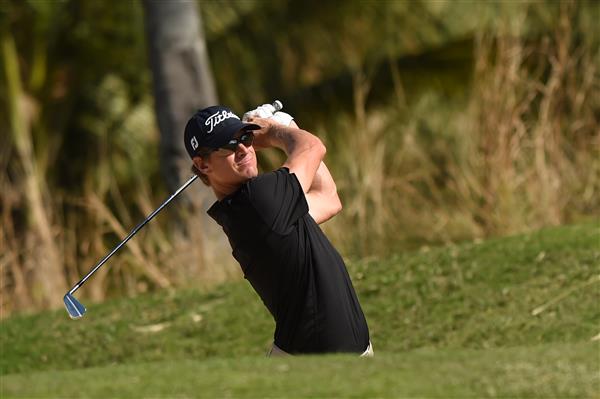 Stephen Dartnall during Round 1 of the Fiji international

Wind? What wind? Prior to the tournament teeing off today the consensus was that the wind would play havoc with scores this week and anything near-par would be considered a good score.

So far this morning however, there are a number of players going low at Natadola with WA’s Stephen Dartnall the clubhouse leader at 4-under par and fellow Aussie Rhein Gibson, Brendan Jones and Japan's Masahiro Kawamura also at 4-under but still out on course.

It’s really no surprise to see Dartnall out to a quick start. A former World Number 1 amateur, the West Australian is known to post low scores on the PGA Tour of Australasia and, despite still looking for his first career title, has never been far away from claiming his breakthrough win. Earlier this year Dartnall finished T4 at the QLD PGA Championship, his best result of the season to date.

With 15 of 18 holes at Natadola exposed to the Coral Coast it will be interesting to see how the conditions affect the afternoon field.

Meanwhile, the locals are getting into the spirit of their first international golf tournament, taking time out to work on their game with our Professionals on site. The next Vijay perhaps? 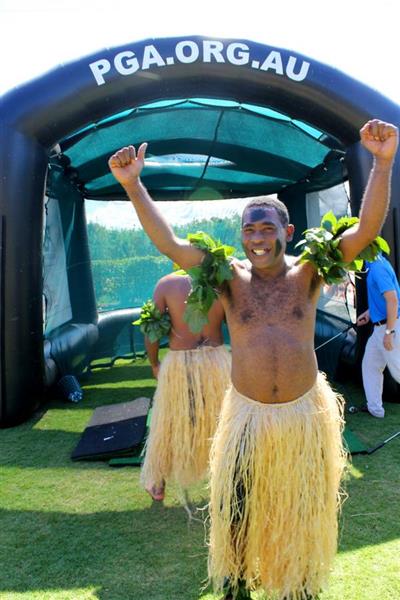 Following at home or from the office? Check out the course layout and scorecard below. 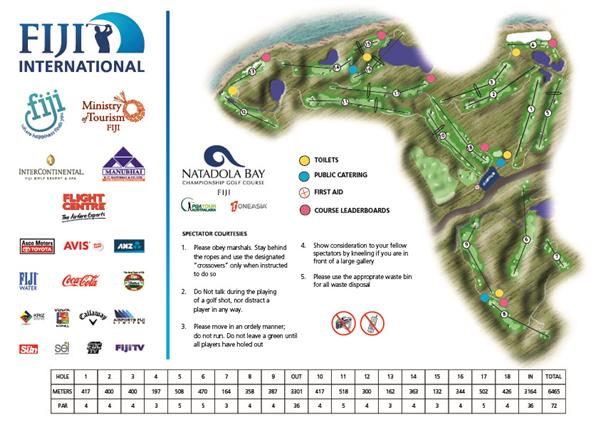 Before the action gets underway, catch up with what's been making news at the Fiji International:

Bula! Welcome to State of Play for the Fiji International!

We’ll be bringing you regular updates from the spectacular Natadola Bay Championship Golf Course in Fiji for all four rounds of the inaugural Fiji International.

If you’re in Australia, you can also follow the action on FOXSPORTS3 from 10am to 3pm AEST today and tomorrow and from 9am to 2pm AEST Saturday and Sunday.

If you’re not in Australia, the Fiji International will be broadcast live and on delay in more than 30 countries around the world so check your local guides for coverage times.

As always live scoring is also available at pga.org.au and you can download the PGA Tour of Australasia iphone app from the itunes store.

The Fiji International at a glance: