For a full wrap from round 4 please click here. 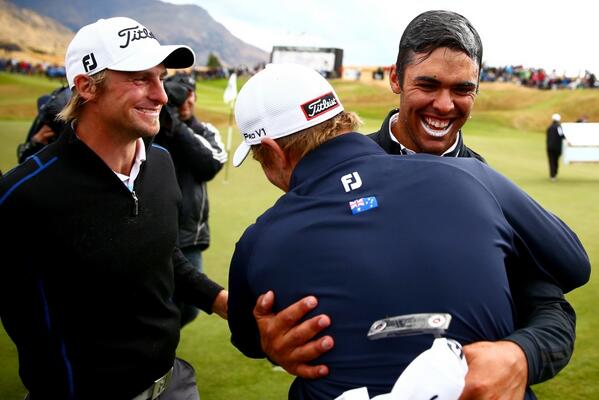 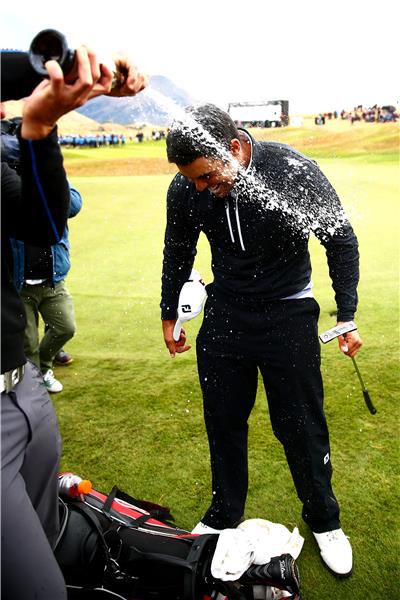 PGA of Australia
@PGAofAustralia
Another birdie for Dimi Papadatos, he now leads by four shots with two holes to play! #NZOpen #DIMInating bit.ly/1krQ0sq
Mar. 2, 2014
Dimi Papadatos is 16-under and leads by three from David Klein and Mark Brown with three holes to play. Tune in live to watch his closing holes at the New Zealand Open 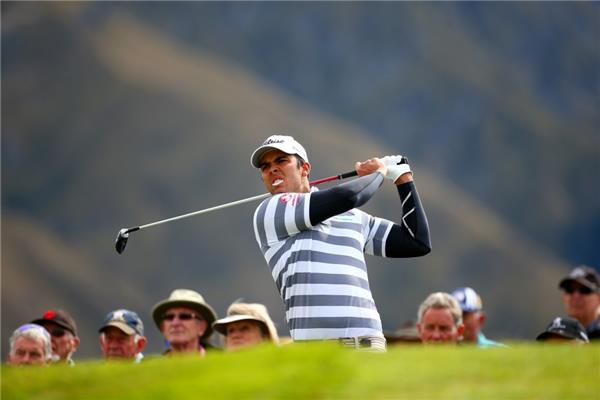 Kiwi David Klein has leapt up the leaderboard. He is 4-under after 14 holes to be 12-under and just two shots back of Papadatos.

Mark Brown is yet to make a mistake today but minimising bogeys isn’t going to be enough. If he is to win he will need to find a few birdies on the back nine.

Terry Pilkadaris, a tournament invite this week, joins Brown and Ryan Fox T3 on 11-under.

The Hills has always provided some dramatic finishes, Gareth Paddison dropping away last year and Andrew Martin the year before.

The tournament is still wide open for someone to come through and win.

We must have put a jinx on Papadatos, immediately after our last post he bogeyed the 5th.

He has recovered with a birdie on the par-4 8th to once again lead by two shots.

Papadatos would be happy with that buffer as the weather has now taken a turn for the worst. Strong winds and rain have hit The Hills which is sure to slow the scoring.

One man on a mission is Ryan Fox. He is 3-under after 11 holes and is now T2 with Mark Brown. His momentum could be beneficial in these conditions.

Matthew Giles is 4-under after 15 holes to be 9-under the card. If he can make another birdie before he finishes he will be very happy in the clubhouse.

Straight off the course and into the commentary booth...Matthew Guyatt will be co-hosting the live stream which tees off at 1pm AEDST. Watch it here. 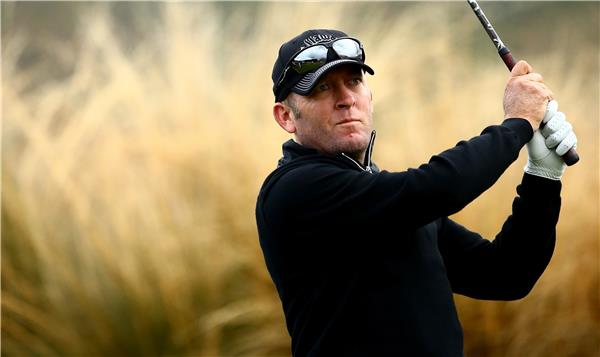 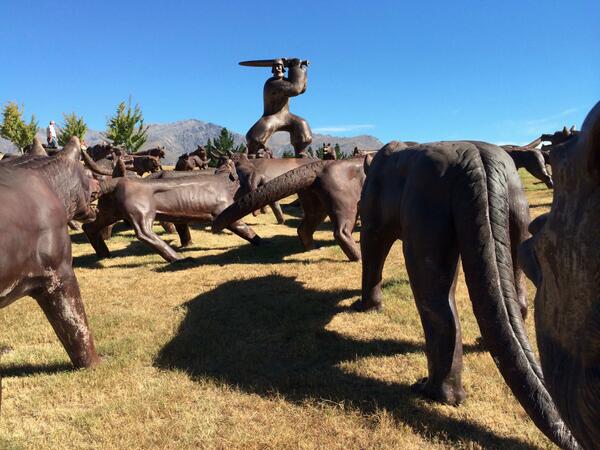 Dimi Papadatos and Mark Brown are holding steady after four holes at 13-under and 11-under respectively.

However its a different story for their playing partner who is now 2-over the card for the day. He is now 9-under and T5 with eight other players including Ryan Fox.

Brody Ninyette and Sam Hamilton have survived a final day charge from Nick Gillespie and John Bowring. Ninyette and Hamilton are looking very secure at the top of the leaderboard.

Dimi Papadatos has birdied the first to extend his lead out to two shots over Mark Brown and Richard Lee.

It’s a good start for the 22-year-old Professional who is leading a PGA Tour of Australasia tournament into the final round for the first time.

West Australian Daniel Fox has leapt up the leaderboard and is now just three shots off the lead with 12 holes still to play.

Rohan Blizard is sure to be regretting his second round of 77. He is 7-under after 16 holes today to be 8-under and T14.

In the teams competiton Kiwi Nick Gillespie and his amateur partner John Bowring are closing the gap on Ninyette and Hamilton.

Second round co-leader Aadm Blyth has opened with a birdie on the 1st. That’s the 95th one second on that hole this week. He is now 9-under and just four back of the lead.

2013 Vic Open champion Matt Giles is off to a hot start with four consecutive birdies moving him into the top-5.

The next group on the tee is the penultimate group of Adam Bland and Ash Hall.

Sunday 2nd March 2014, 11.10am We are still over an hour away from the leaders teeing off and we have seen Dimi Papadatos hard at work on the chipping green but there is plenty of players on course.

Ben Campbell is moving his way up the leaderboard with four consecutive birdies. He is now 2-under and T17th.

Also on 4-under today is Rohan Blizard. The New South Welshman was is trying to recover from a second round 77 which dropped him well out of contention.

The lowest man on course so far is Callan O’Reilly; he is 5-under after 14 holes but is well back on the leaderboard. O’Reilly earned his place in the field thanks to winning Qualifying School.

The Amazing Race host Phil Keoghan may not have made it through to the final round but he enjoyed playing alongside Richard Lee for the first three days.Richard Lee will tee off at 12.26pm and is just one shot off the lead.
NZ Open 2014 - Phil Keoghan/Hulk Hogan
by New Zealand Open via YouTube
We would like to say a big thank you to all our hard working volunteers this week!
NZ Open 2014 - Cheers, Ears & Volunteers
by New Zealand Open via YouTube

While all the hype has been around the New Zealand Open let’s not forget that the NZ Pro-Am Championship is being run concurrently.

Just 10 teams have made the final cut and will be taking on The Hills today. For the amateurs there are lots of exciting prizes up for grabs while the Pros are competing for a NZ$50,000 prize purse.

Brody Ninyette and his amateur partner Sam Hamilton have been an unstoppable combo and are an astounding 36-under the card.

They have a 10 shot lead over Josh Geary and Gerard Peterson.

Stephen Fleming is the only celebrity player left standing in the competiton. Partnered with  Mark Brown he will be playing in the final group of the Championship!

New Zealand Open
@NZOpenGolf
Final Day of the #NZOpen . Gentlemen of the field may you be at your best, this is a magical place where amazing things can happen...
Mar. 2, 2014

Bevan Tydda
@BevanTydda
Good morning Queenstown. Ready for the final round of the NZ Open at the Hills. #NZOpen #Queenstown #TheHills pic.twitter.com/kspNEEORGZ 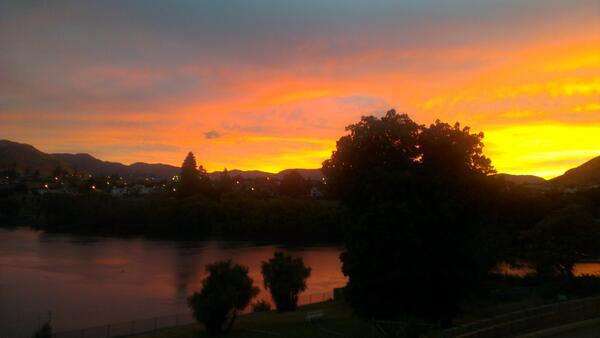 Welcome to the final round of the New Zealand Open.

Starting the day with a one shot lead, 22-year-old New South Welshman Dimi Papadatos will be looking to win his first Professional title since joining the PGA Tour of Australasia in 2013.

However a strong Kiwi contingent are aiming to win their National Open and in the process ending their 11 year winner’s drought.

They are five Kiwi’s in the top-5 including Mark Brown, Richard Lee, Craig Palmer, Gareth Paddison and Kieran Muir.

For a full recap on the round three action check out yesterday’s State of Play or read the daily wrap article here.