Thanks for joining us for the 2nd round. We will be back bright and early tomorrow for round 3.

For a full wrap from round 2 please click here.

"I don’t know what it was but it was freezing cold, I struggle in the cold at the best of times so I was really happy to hang in there," Dimi Papadatos.

"I putted unbelievable today it was pretty good. So if I had a couple of minutes to count up my putts it would be pretty silly," said Adam Blyth who had just 19 putts in his second round.

PGA of Australia
@PGAofAustralia
That round from Adam Blyth contained just 19 putts! #NZOpen #Incredible
Feb. 28, 2014
We think everyone will be happy to be in the clubhouse after today's chilly conditions. But bring on tomorrow and an exciting third round!

PGA of Australia
@PGAofAustralia
The wolves got @RoccoMediate - he doubled the 18th hole, the home of Michael Hills infamous wolves, to MC. #NZOpen pic.twitter.com/EZAZeoPGJC 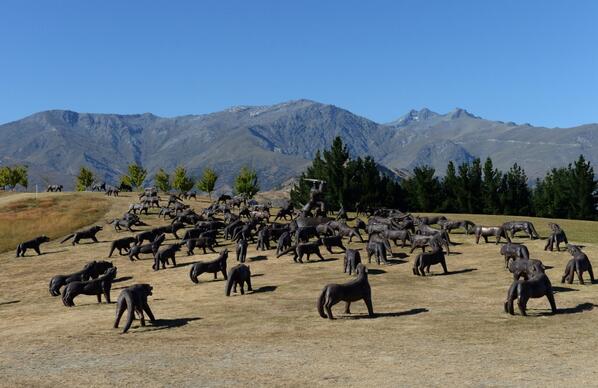 PGA of Australia
@PGAofAustralia
The cut line has moved to 1-over. Mike Hendry & @RoccoMediate have both birdied the 17th to be on the number #NZOpen
Feb. 28, 2014
The weather didn't seem to effect Bryden Macpherson, he fired a 68 at Millbrook Resort to be T5 heading into the weekend. 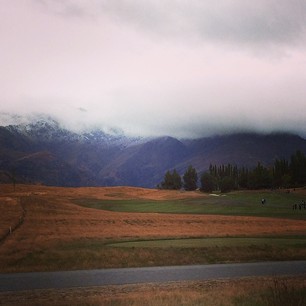 Tune in LIVE to the highlights show wrapping up today's play. It will also feature Tournament Director Graeme Scott explaining the crazy weather conditions we have experienced. Click here to watch now. 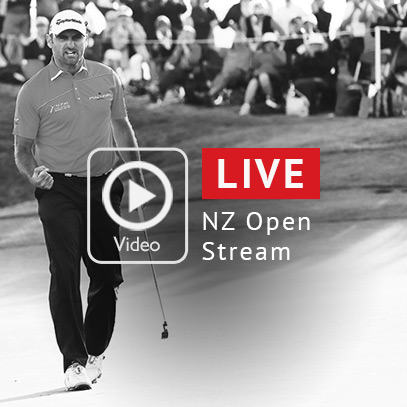 There hasn’t been much movement at the top end of the leaderboard however Adam Blyth has jumped into the top-5.

At the other end of the leaderboard players are battling to make the cut which is predicted to be even par.

Those at risk of going home include Michael Hendry, Rocco Mediate, Jake Higginbottom and Craig Parry.

To find out if your favourite player is inside the cut line check out the live scores.

PGA of Australia
@PGAofAustralia
It's been great having @MorningGlorySEN here in Queenstown for the #NZOpen . Here is their chat with @RoccoMediate sen.com.au/audioplayer
Feb. 28, 2014

Jake Stirling, who has played most his golf on the Asian Development Tour, is 2-under after seven holes at The Hills. He is outright 8th and just one shot behind leader Richard Lee.

Over at Millbrook New South Welshman Dimi Papadatos is 2-under after 10 holes to be T4 on 6-under. Dimi is in his second year as a Professional and has just earned full status on the Asian Tour.

Also on 6-under is Mark Brown who is playing the more challenging The Hills layout.

In the teams event Brody Ninyette and amateur Sam Hamilton have absolutely smashed it. They are 25-under the card with their nearest rivals, Jake Stirling and Yong Kwak 14-under the card.

The team of Ricky Ponting and Daniel Popovic are 8-under the card T35 with just the top-30 teams making it to the weekend rounds.

Mathew Perry is happy to be in the clubhouse at 7-under the card and just two shots off the lead. Here is a quick interview with him after his round...
NZ Open 2014 - Mathew Perry Interview
by New Zealand Open via YouTube

PGA of Australia
@PGAofAustralia
An interesting fashion choice from @deags_84 but necessary for the conditions at the @NZOpenGolf #keepingwarm #NZOpen pic.twitter.com/EAhnECFNLH 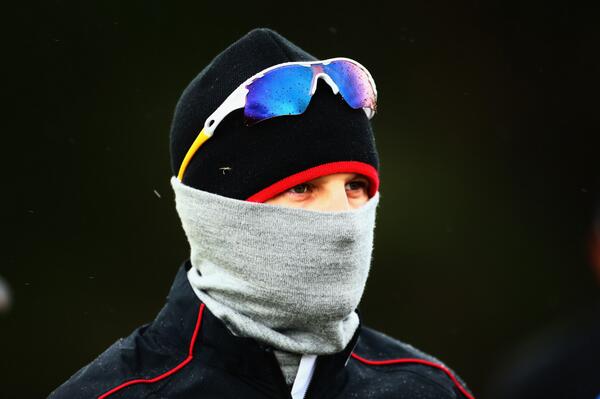 Playing The Hills layout in the second round Andrew Dodt is 6-under after 6 holes to be outright second on 8-under the card. He is just one shot behind tournament leader Richard Lee.

Dodt played at The Hills and finished runner-up to American Bobby Gates in the 2010 New Zealand Open. That year he had his father-in-law caddying and he is on the bag again this week. Maybe this will prove a winning combo this year.

Vic Open champion Matt Griffin is also working his way up the leaderboard. He is 3-under after 6 holes to move inside the top-10.

While still very early to call the cut line it is currently predicted to be at even par.

PGA of Australia
@PGAofAustralia
What a difference a day makes @NZOpenGolf . Blue skies one day, snow the next! #NZOpen #Queenstown #snow #brrrrr pic.twitter.com/GdkwrFhhsS 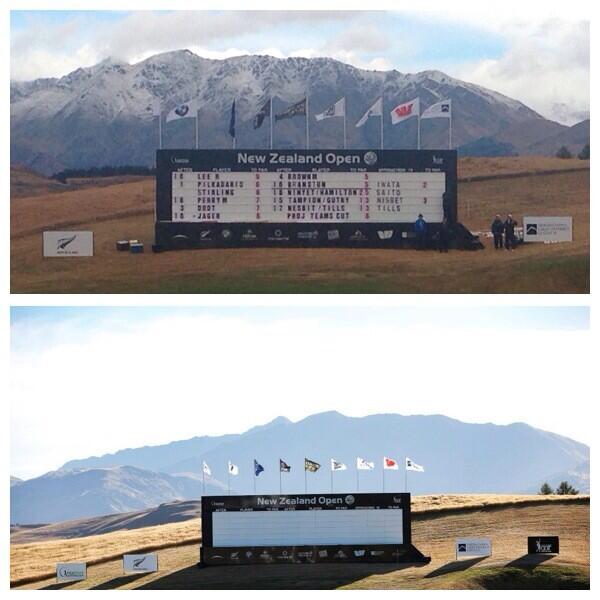 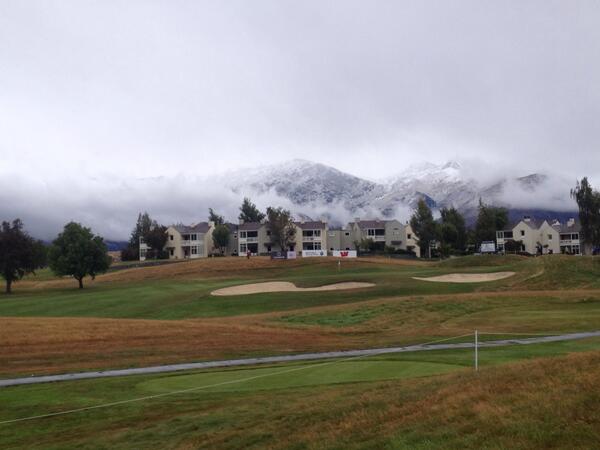 Richard Lee has finished his second round and leads at 9-under the card. Bogey free today to sign for a 67, Lee has just one blemish on his scorecard after 36 holes.

Another Kiwi Mathew Perry finished just two shots shy of Lee and is currently T2 with Matthew Jager who has three holes to play and Millbrook and Andrew Dodt who has 15 holes to play at The Hills.

Lee and Perry were both happy to be safely in the clubhouse as rain started coming down in Queenstown making conditions very challenging for the afternoon field. For all live scores please click here.

PGA of Australia
@PGAofAustralia
Random Richard Lee stat for you - in 2010 he became the only Kiwi golfer to shoot a 59 in comp. He leads the @NZOpenGolf #NZOpen #CanGoLow
Feb. 28, 2014

Richard Lee continues to lead at 8-under.

West Australian Matt Jager has jumped up the leaderboard to join the pack at 6-under the card. Playing the Millbrook layout today, Jager is 3-under after 10 holes.

Also playing at Millbrook today is Ryan Fox. Teeing off at 11.56, Fox is renowned for his long hitting abilities which he believes could be an advantage to him at Millbrook. Here is a quick video on his thoughts of the layout.

Starting the round at 2-under the card and T30th we are expecting him to jump up the leaderboard.

The cold conditions are obviously not bothering Korean Soon-Sang Hong. He is 5-under after 14 holes at Millbrook. He was moved inside the top-10 on the leaderboard.

Richard Lee is charging along. He is now 4-under after 11 holes to lead by two shots at 8-under.

In the team’s event, Brody Ninyette and his amateur partner Sam Hamilton are combining well. They are 20-under and eight shots clear of their nearest competitors!

Currently it is just 11 degrees in Queenstown with conditions set to worsen; in fact we can see snow forming on the Remarkables!Here is a video produced yesterday detailing the weather we are expecting for the remainder of the tournament... 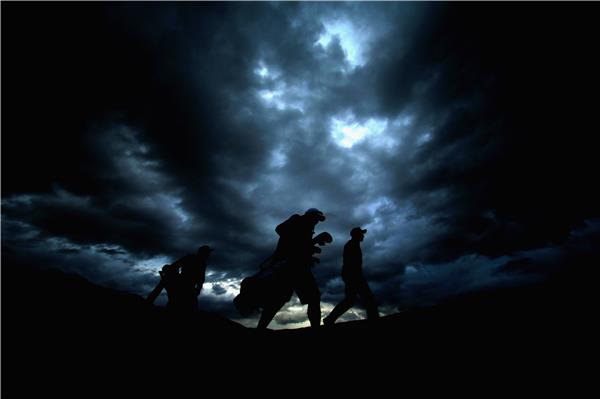 It was just 10 degrees when players teed off this morning

Victorian David Bransdon has moved into a share of the lead at 6-under the card thanks to a birdie at the par-5 13th hole at The Hills.

Bransdon, who won the Heritage Classic in 2013, has been in good form coming into this week.

He finished T9 at his first tournament of the year, the Victorian PGA Championship which he followed with a third place finish at the Queensland PGA Championship. His week in Queensland was highlighted by a course record equalling first round of 61.

Also joining the leaders is New Zealand’s Richard Lee who is 2-under after 7 holes at The Hills to all so be the leading national in the tournament.

Meanwhile, Scott Strange ran into some trouble with a bogey on the par-4 6th followed by a double bogey at the par-4 7th. He has dropped to 4-under the card and T10 on the leaderboard.

Overnight co-leader Scott Strange has made an early birdie to move one shot clear of the field.

He is the only one of the four round one leaders to be playing in the morning field today.

While scoring on The Hills was tougher than Millbrook in the first round, Strange was looking forward to heading out on Sir Michael Hill’s private golf course.

Strange finished runner-up on the layout at the NZ PGA Championship last year, he lost in a playoff to Michael Hendry.

Going low early this morning is Matthew Giles. He is 2-unde after three holes and has moved his way inside the top-30. Giles has struggled with form since winning the Vic Open in 2013 so will be happy to see his scores in the red this week.

Welcome to round two of the New Zealand Open.

We are set for an exciting day of golf as we head into the round with a congested leaderboard. Australians Andrew Dodt, Terry Pilkadaris, Jake Stirling and Scott Strange all lead at 6-under the card after playing Millbrook Resort in the first round.

They come across to The Hills today which has been playing the harder of the two courses which may allow those competing at Millbrook today the opportunity to cut down their lead.

For a full recap on the round one action check out yesterday’s State of Play or read the daily wrap article here.