PGA of Australia
@PGAofAustralia
The fist pump said it all... congratulations @MattGriffinGolf . Here's to a big year ahead! #VicOpen pic.twitter.com/0Myb9Lm1LM 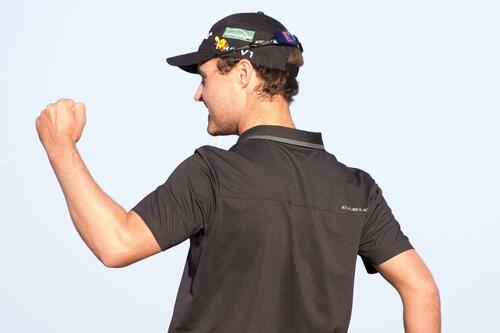 On an exciting day for Australian golf where the future was clearly on show in both the men’s and women’s tournaments, Griffin captured his home state title in spectacular fashion.

It took Griffin three playoff holes to overcome New South Welshman Matthew Stieger, the pair finishing deadlocked at 7-under par while overnight leader Brett Drewitt finished a shot back at 6-under par.

For Griffin, who had previously won a PGA Tour of Australasia event in New Caledonia and two OneAsia tournaments in Asia, the emotion-charged fist pump as he sank the final birdie putt on his fourth trip up 18 said everything.

“Incredible,” the 30-year-old said with eyes full of emotion.

“To win your state open is huge, aside from that the Australian Open is next.”

With two holes to play, we're all tied at the top!! Stieger, Griffin and Drewitt all 6-under par.

Mark Hayes
@HayesyHeraldSun
Fist pump from @MatthewStieger as he drains a birdie to join @vicopengolf lead at -6!!
Feb. 23, 2014

Brett Drewitt is back in the Oates Vic Open lead with Matthew Steiger double bogeying the 14th hole while Matt Griffin and Drewitt birdied.

Stieger found a bunker at the back of the 14th green and couldn't drop the putt to minimise the damage.

Drewitt now leads by one shot at 6-under par with Stieger and Griffin at 5-under.

Andrew Kelly and Terry Pilkadaris are tied at 4-under par.

The leading group has seasawed all day long, and has just teed off the 15th hole.

Our leading men have just completed the front nine, and it’s been a big last two holes.

With some extraordinary golf being played on the Beach course it’s anyone’s guess who will take out the Oates Vic Open title.
On the 8th hole Matt Griffin three-putted for bogey to fall three behind Brett Drewitt’s lead.
However the Melburnian clawed his way back into it on 9 with a costly bogey from Drewitt.
Stieger meantime, playing with the composure of a Pro twice his age, holed a 10 foot birdie putt to level the lead-score at 6-under par.
Matt Griffin trails by one heading into the back nine.
Click here for the current leaderboard. 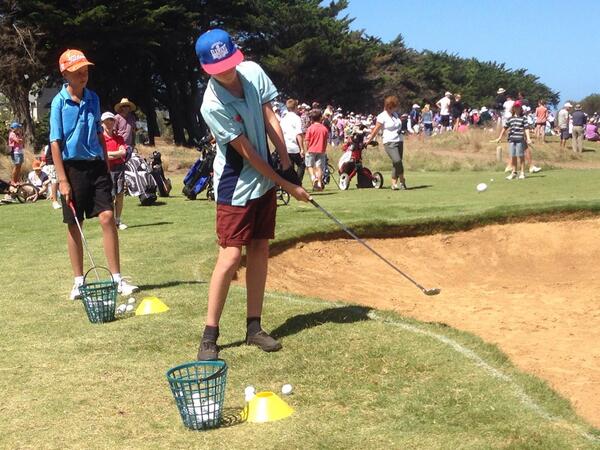 PGA of Australia
@PGAofAustralia
Crowd on the ninth as @greeny_63 lines up a birdie putt #VicOpen pic.twitter.com/QwC8jcvwhS 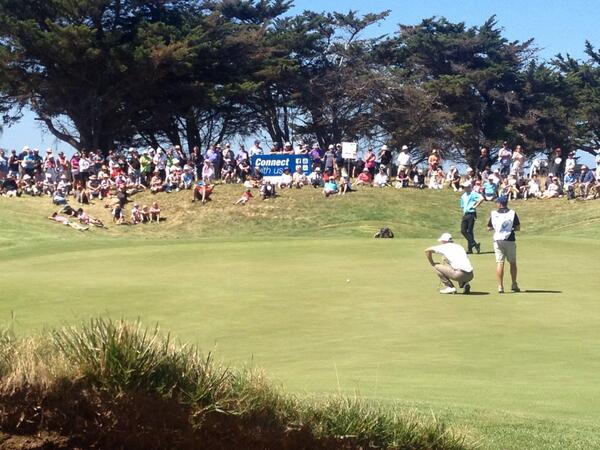 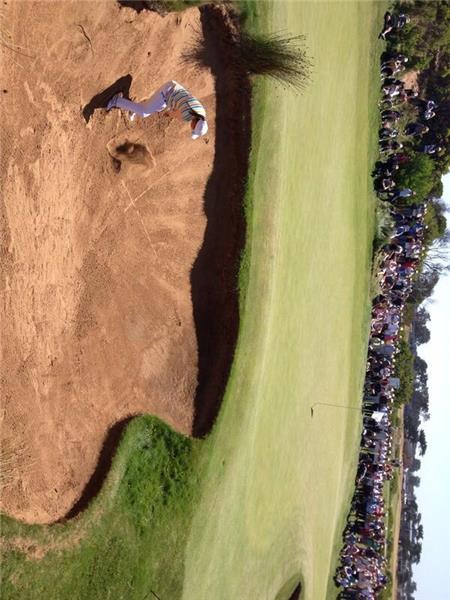 Standing on the first, the last thing overnight leader Brett Drewitt did before teeing off was high five his good mate Matt Stieger.

It was a just display of the mateship between these two childhood friends who for the next 18 holes will be bitter rivals.

And they haven't wasted any time chasing the PGA Tour of Australasia title.

Stieger birdied the first hole to momentarily join the lead at 5-under par but not letting nerves get in the way the Rookie Drewitt answered back on three with his first birdie of the day.

However Stieger has just birdied the 4th to rejoin the lead at 6-under par, the duo now two ahead of Matt Griffin. 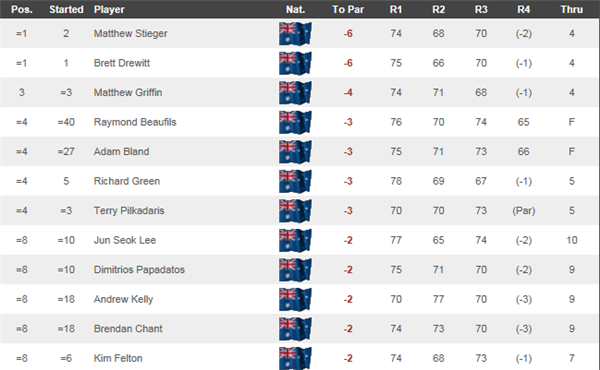 13th Beach Golf
@13thBeachgolf
Thanks to all spectators for coming out. We hope you enjoy some great golf @VicOpenGolf @PGAofAustralia @ALPGtour pic.twitter.com/NTEeBXD151 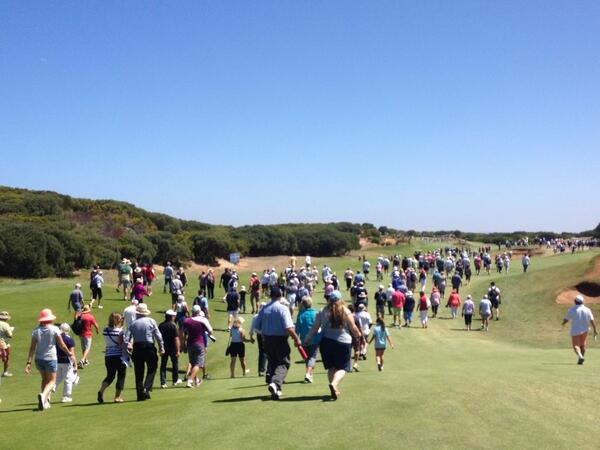 13th Beach Golf
@13thBeachgolf
It's a Copperhead! Spectators: please do NOT walk in the long rough!! @VicOpenGolf @PGAofAustralia @ALPGtour pic.twitter.com/vGmnI78UCt 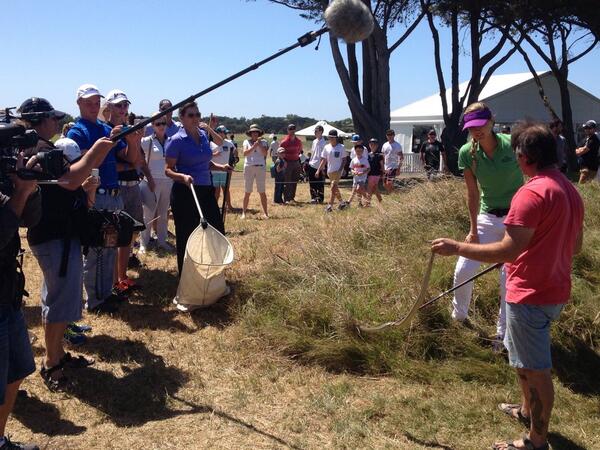 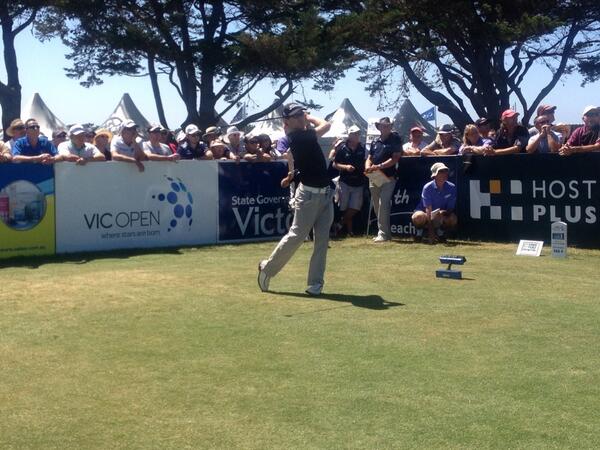 Raymond Beaufils 7-under 65, finished at 3-under for the Oates Vic Open

Alex Hawley 5-under 67, finished at 2-under par

fee telford
@Bomberlass76
@VicOpenGolf trophies polished & ready to go to winners of #OatesVicOpen this arvo. A great day of golf lies ahead! pic.twitter.com/kTZM29bS7V 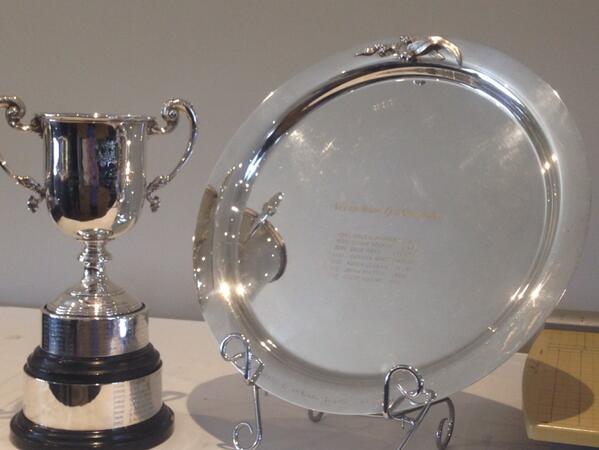 With a final round of 7-under 65 to finish at 3-under par in a tie for third, Ray Beaufils was surprised with how well he played around 13th Beach today.

“I was actually running really low on confidence,” he said after his round.

“With the wind all week long you have to make shots and I guess that’s what I did today.”

With seven birdies and no bogeys Beaufils went close to equalling the course record of 64 set by Richard Green and Michael Choi at last year’s Vic Open.

However unfortunately he missed a short putt on the last for birdie, the Queenslander nevertheless happy with his bogey-free round.

“It makes the card look pretty,” he laughed, admitting he was aware of where the score put him on the overall leaderboard.

“I had a little bit of a look but you never know out here with the weather. It’s pretty nice out there now, it’s a perfect Melbourne day right? So I wish the guys the best this afternoon and hopefully they drop some putts like I did.” 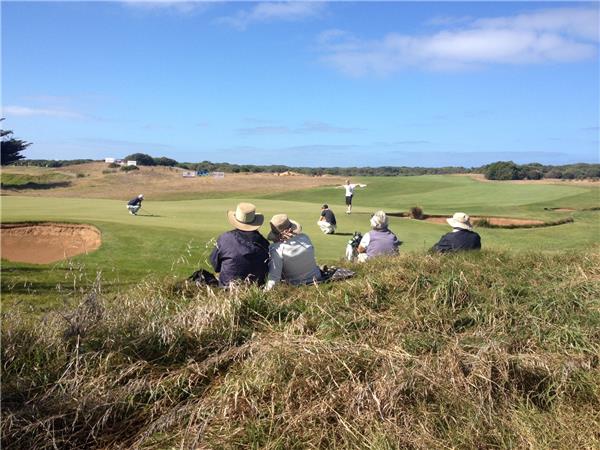 PGA of Australia
@PGAofAustralia
What about @ray_beaufils tearing up @13thBeachgolf this morning? 5-under through 12 holes and into T6 at the #VicOpen .
Feb. 23, 2014

Raymond Beaufils is showing that a good score is very, very possible at 13th Beach today - he's 5-under through 6 and there isn't a blemish on his card to date.

If you're following our leaders this afternoon below are the tee times for the leading groups:

Also, we're back on the Beach Course today - check out today's hole locations below: 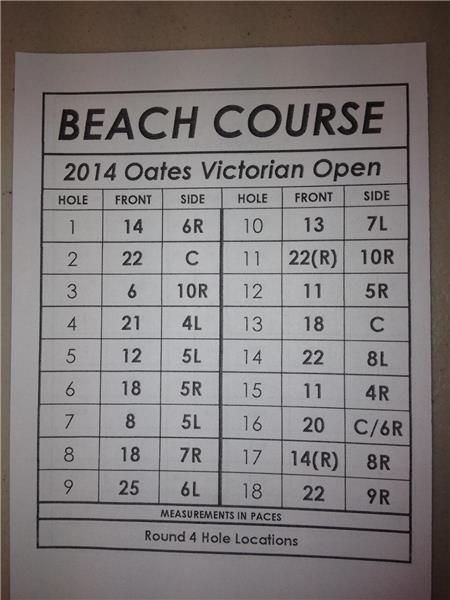 Sunday 23rd February 10.10am
If you have an iPhone and you're a fan of Australian golf, don't forget you can follow all the PGA Tour of Australasia action with our App.
Available to download for FREE at the App Store, the PGA Tour of Australasia app will ensure you have the latest features on hand to watch, play and discover this upcoming golf season.App features include live scores and player score cards, tee times, hole by hole statistics, tour schedules, course overviews, latest news and information, videos, photo galleries and more.
Visit www.pga.org.au/mobile to download or search for PGA Tour of Australasia in the iTunes store.
Sunday 23rd February 10.00am 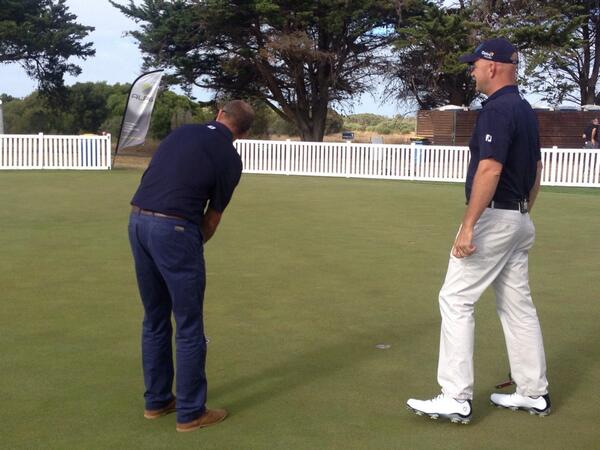 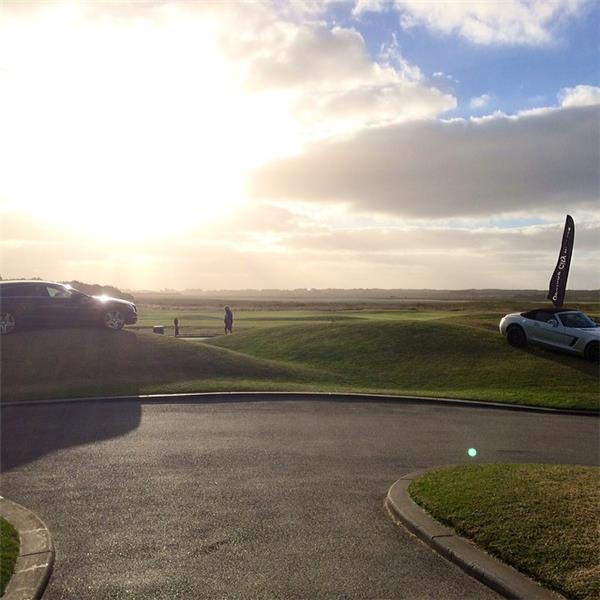 Kingy
@tom_king79
As well as a handy-sized cheque, here is what they're playing for at the @VicOpenGolf pic.twitter.com/6q1JKApJtL 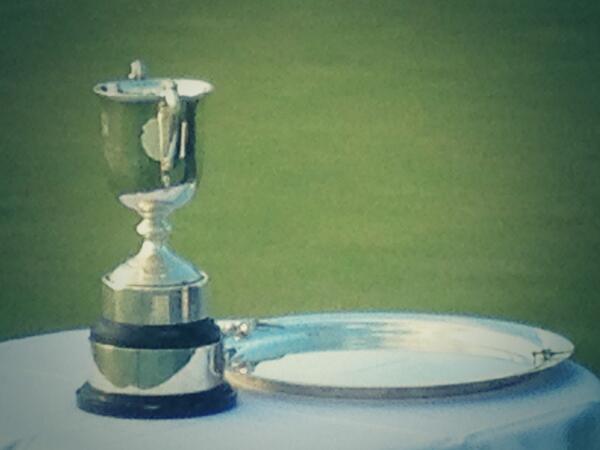 - South Australia’s Adam Bland is 2-under through 5 holes

- Raymond Beaufils is 3-under through 7 holes

- Wayne Perske 1-under through 3 holes

- Jason Norris 1-under through 1 hole

PGA of Australia
@PGAofAustralia
Gorgeous morning at @13thBeachgolf as Victorian @nholman37 gets his final round of the #VicOpen underway pic.twitter.com/4rYS6eZmzb 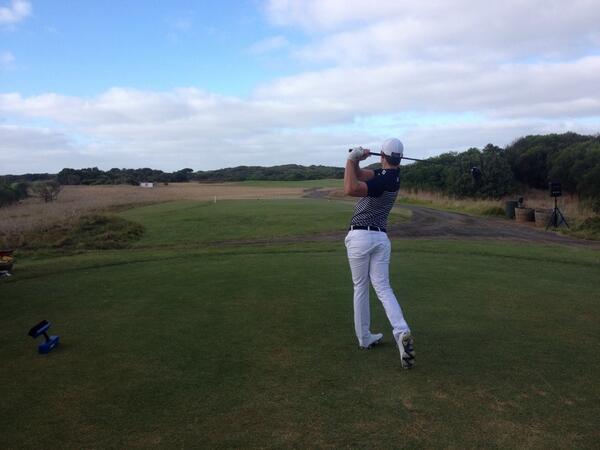 Feb. 23, 2014
Sunday 23rd February 8.20am
Great piece on the Oates Vic Open in the Herald Sun today by Mark Hayes. Click on the link below to read the article online.

PGA of Australia
@PGAofAustralia
"That he finished w/ a smile... says everything about why @MatthewStieger stands out" says @HayesyHeraldSun bit.ly/1f7rZ4L #VicOpen
Feb. 22, 2014
Or for a wrap of the Women's Championship follow the link below:

If you want to catch up with yesterday's action, click here to read the Round 3 wrap.
Click here for Round 4 tee times. 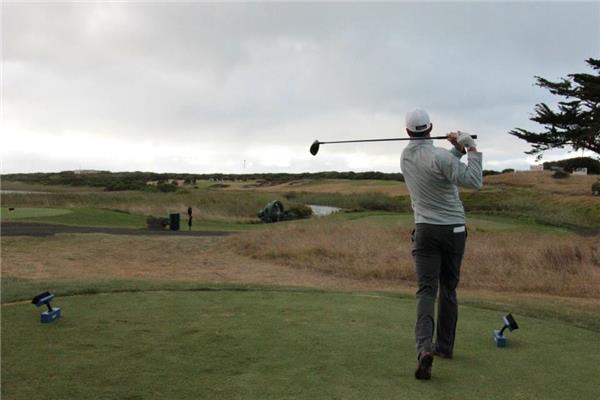