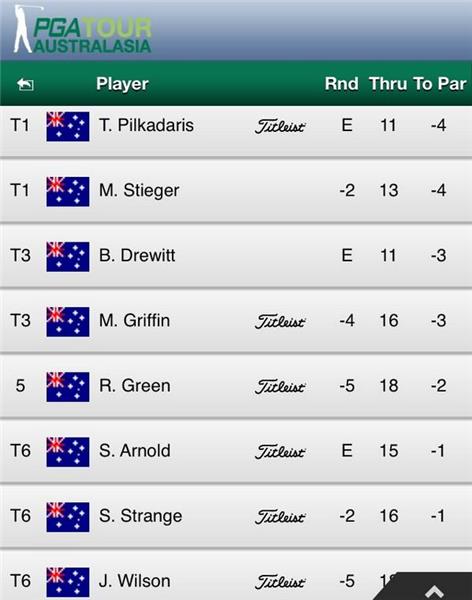 Feb. 22, 2014
Saturday 22nd February 4.10pm
Round 3 of the Oates Vic Open will come down to the wire with Matthew Stieger and Terry Pilkadaris tied at the top at 4-under par and Matthew Griffin and Brett Drewitt one shot back
As the lead continues to change through the back nine, Pilkadaris, Stieger and Griffin have each had a share of the outright lead with plenty of golf still to be played this afternoon.
Click here to see the current Oates Vic Open leaderboard. 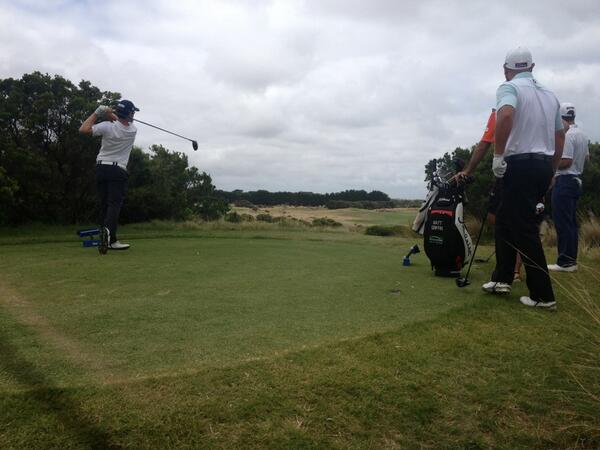 Victorian Open
@VicOpenGolf
Steiger leaves one out there with bogey on 9. Makes the turn at -4. Arnold, Pilkadaris and Griffin chasing at -3 @PGAofAustralia @GolfAust
Feb. 22, 2014
Saturday 22nd February 3.00pm
The Oates Vic Open leaderboard is a moving feast today with NSW’s Matthew Stieger currently leading the way.
Stieger is 3-under through 8 holes this afternoon while overnight leader Terry Pilkadaris (1-over today) is tied for second at 3-under with Scott Arnold (2-under through 9).
23-year-old Stieger, the 2011 Australian Amateur Champion, won his first PGA Tour of Australasia event in 2012 at the NSW PGA Championship.
The man from Narrabri spends his time competing on both on the PGA Tour of Australasia and the Asian Tour where he achieved four top 10 finishes in 2013 to earn over US$80,000 in his rookie year.
Click here to see the current Oates Vic Open leaderboard. 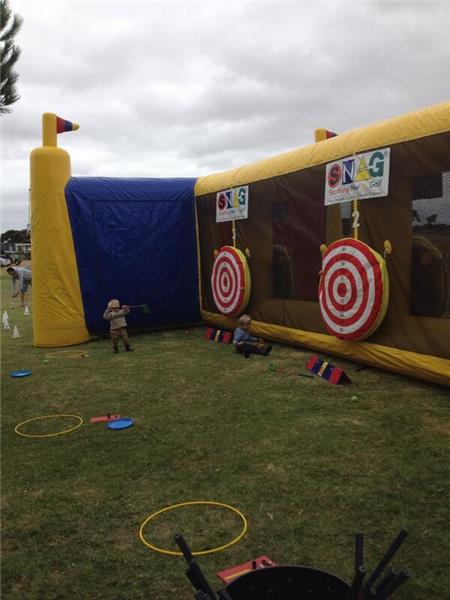 Feb. 22, 2014
Saturday 22nd February 1.00pm
With the help of an old putter, Richard Green has put himself back into contention for his first PGA Tour of Australasia title in nearly ten years.
“I’ve been using a putter that I did very well with in the early 2000s,” he said after his round.
“I put an old putter in the bag on Friday and it’s worked. It’s been a putter my dad’s been using. He hasn’t been using it for a while so I thought I’d bring it down here and give it a try because it’s been a part of my game I’ve been wanting to work on and it’s difficult to change when you’ve been doing something the same way for so long “.
“It was difficult on Friday morning with a new putter in the bag but straight away on the first hole I holed a putt so it sort of kicked me off and off we went from there. Today was just another extension of yesterday.”
Having played successful on international Tours for two decades, Green says he’s happy with where his game is at, and hopes it’s the start of somewhat of a revival for his game.
“I’m driving the ball as good as I ever have and now the putter is starting to work it’s showing some results so fingers crossed I can get some of the other parts of my game sharpened up and get back to competitive golf.”
“I’m desperate to keep playing well and I’ve still got a couple of years to go I reckon I feel fit, fitter than I was last year, so we’ll see.”
“I’ve been wanting to win this tournament since I was an amateur. It’s going to be difficult from where I am being plus 6 after the first day, but I just have to hope the leaders don’t go too far and I can compete tomorrow.”
Saturday 22nd February 11.00am
Make that now 5-under through 13 holes today for Jack Wilson!

PGA of Australia
@PGAofAustralia
This man @jackwilson90 is 3-under thru 11 today and into the #VicOpen top 20. Photo by @MitchGPhoto pic.twitter.com/g5m0sWTDdI 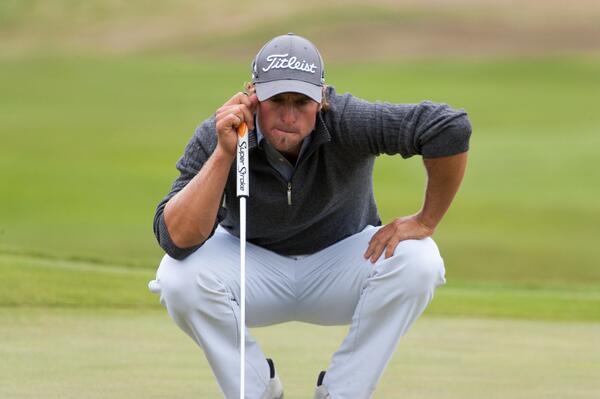 With our leaders yet to tee off, below is a look at some of the movers making an impact this morning. 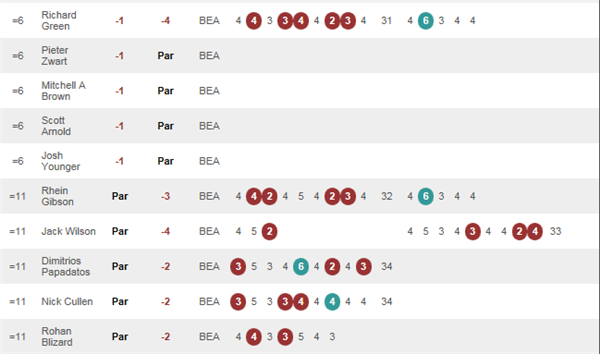 After a tough first half of the Oates Vic Open South Australian Nick Cullen is climbing the leaderboard on day three and is 3-under through 5 holes this morning.

The 2013 Queensland Open Championship, Nick is no stranger to contending on the PGA Tour of Australasia and is also a former OneAsia winner.

After a hectic end of year schedule in which he finished 4th at the Australian Masters, the Oates Vic Open is Nick’s first event of the year.

Nick finished T24 at last year’s Vic Open, his best round a 68 on Sunday. 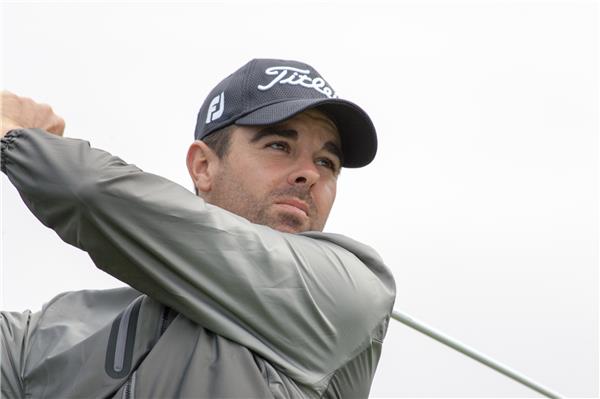 Saturday 22nd February 9.45am
The Oates Vic Open is getting behind Challenge and their much-loved Ambassador Jarrod Lyle this weekend. Find out how you can help support kids with cancer at 13th Beach Golf Links - visit www.pga.org.au for details or click on the link below.

PGA of Australia
@PGAofAustralia
Oates Vic Open supports Challenge: The #VicOpen is lending a hand in an effort to raise money for Challenge. bit.ly/MJrx6B
Feb. 22, 2014
Saturday 22nd February 9.30am
Today’s hole locations on the Beach Course… 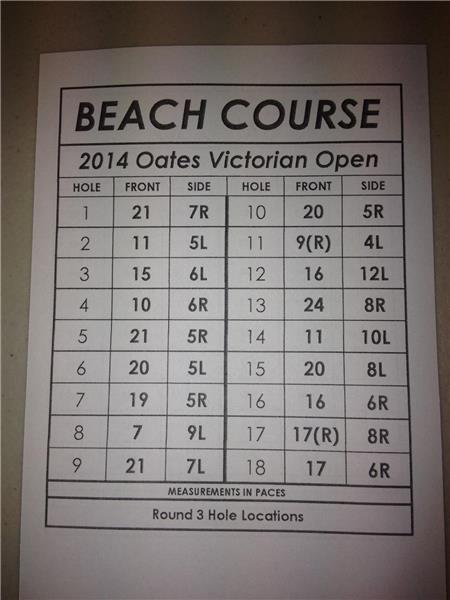 Richard Green’s momentum continues this morning, the Victorian now 5-under through 8 and tied for 3rd position at 2-under par total!

His best score on the Beach Course is an 8-under 64 in Round 4 of last year’s Vic Open.

Could be match that today?

But Greeny isn’t the only player making a move on Saturday morning.

His playing partner Rhein Gibson is 4-under through 8 holes and into the top 10.

European Tour player Richard Green has wasted no time making a move this morning birdying three of his first five holes.
Greeny is now even par for the tournament and tied for tenth position, and could shoot a low score with conditions somewhat calmer than what we’ve experienced for the last two days.
Richard’s last Professional win can in 2010 at the Portugal Masters.
A three-time European Tour winner, his only win on the PGA Tour of Australasia came at the 2004 Australian Masters. 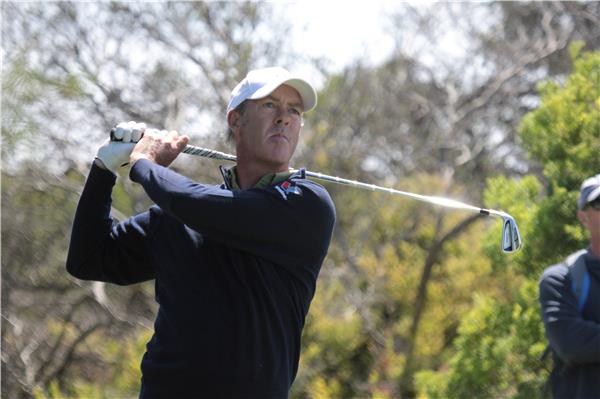 The women are also out on course this morning following another big day on Friday when Queenslander Sarah Jane Smith followed up her remarkable opening round with a solid two-under-par to retain the lead.

The 29-year-old is chasing her first ALPG title and has never been in such a commanding position heading into the weekend.

However, it won’t be easy as Western Australian amateur Minjee Lee is challenging for the third straight week for a professional title.

Smith sits atop of the leaderboard on seven-under-par, with Lee (70) three shots back.

Once again the wind was up at Thirteenth Beach and conditions were challenging for everyone.

Only two other players are in red numbers, ACT’s Nikki Campbell (67) and American Hannah Jun (72), they are both at one-under-par and share third position. 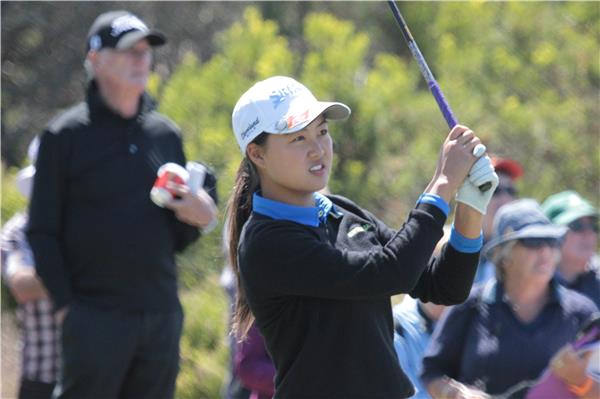 Plenty of players took to Twitter last night after missing or making the 36 hole cut.

Steve Jones
@Stevejones_54
Disappointing result this week, big thanks to @juzzy1607 for being a great looper and for everyone else for coming out. #VicOpen
Feb. 21, 2014

Matt Griffin
@MattGriffinGolf
Rapt with 1 under today at 13th beach! It was brutal out there this afternoon and would have been easy to fall out of contention #bigweekend
Feb. 21, 2014

Matthew Giles
@matthewbgiles
Well that's one way to butcher a finish.. Disappointing stuff. All the best to everyone at #VicOpen on the weekend and bring on Queenstown
Feb. 21, 2014

Welcome back to 13th Beach Golf Links for Round 3 of the Oates Vic Open.

Our weather forecast today is early showers clearing early in the day with moderate SSW winds increasing slightly into the afternoon.

Play is already underway with the first groups now out on course.

Our leading group of Terry Pilkadaris, Brett Drewitt and Kim Felton is off at 1.00pm.

All groups are playing the Beach course today.

For a full wrap of yesterday’s play check out our Round 2 State of Play.

You can see all Round 3 tee times here.

Be sure to check back throughout the day for updates.