Bringing you updates from #VICOPEN at 13th Beach Golf Links as they happen.

Terry Pilkadaris will lead the Oates Vic Open into the weekend after a second consecutive round of 2-under 70 at Thirteenth Beach Golf Links on Friday.

Playing the Creek Course, Pilkadaris navigated the layout somewhat blind having not played a full practice round due to inclement weather early in the week.

However considering the circumstances and a less-than-ideal close to his round, the Victorian is happy to be well placed heading into tomorrow.

“I three-putted 17, the wind got up so that was a bit disappointing,” said Pilkadaris.

“I holed a nice putt for 18 for par, so you can’t really dwell on one bad shot. We’re back playing on the Beach Course tomorrow so I’m more familiar with that and looking forward to it.”

PGA of Australia
@PGAofAustralia
How good is the Campbell family travelling today @ the #VicOpen ? Nikki is T3 while brother Chris is currently T10 (thru 15) #keepitgoing
Feb. 21, 2014 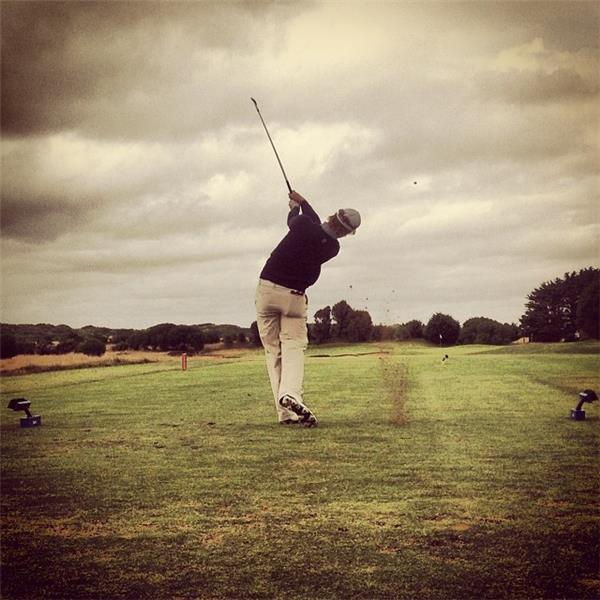 There have been plenty of hard luck stories this week, none more so than Andrew Kelly who today went from co-leader at 4-under to outside the top 20 at 2-over.

“I lost it mid-way through my round. I’ve been a bit inconsistent lately. I was feeling good early and made a few puts and had a few good bounces but there were a couple of ordinary shots and I lost a lot of confidence with a few clubs,” said Kelly.

“Hopefully I’ll do better on the weekend but I just couldn’t see the shot I wanted to hit and it was pretty demanding with the wind.”

“The scoring isn’t as low as I thought it would be so you never know. If I can get out early and have a good score I might be able to catch up a bit. There’s still half a tournament to go so you never know what could happen."

The cut is likley to be made at 4-over par - click here to check out the full leaderboard. 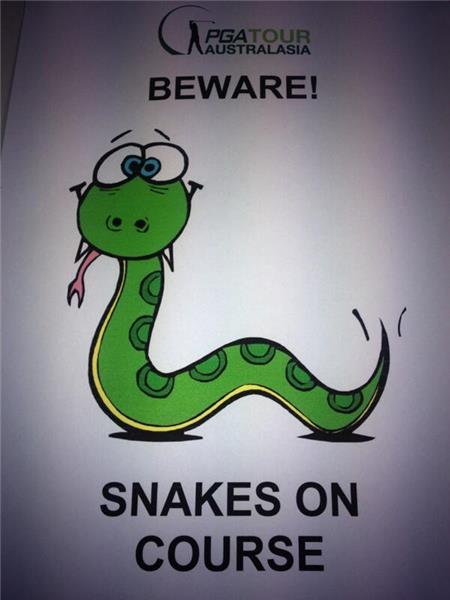 It’s been a slow old afternoon at the Oates Vic Open, with Terry Pilkadaris’ 4-under holding up in windy conditions.

Pilks leads by one over Brett Drewitt who had a second round of 6-under 66 while WA’s Kim Felton, Matthew Stieger, Jun Seok Lee Jun Seok Lee and Andrew Kelly are third at 2-under par.

Still out on course, WA’s Scott Strange has fought his way into the top-10 and with a few holes to play today could still make an impact this afternoon.
In the women's event, is still well and truly in control. Check out the top ten below. 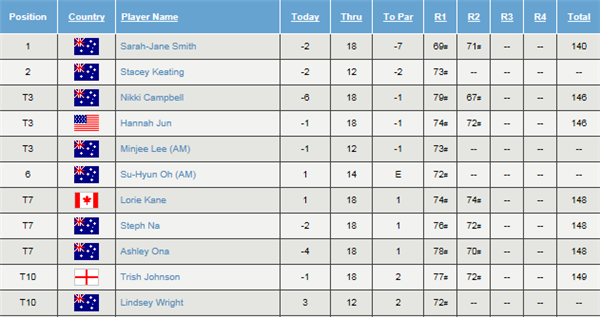 Mark Hayes
@HayesyHeraldSun
Sydney's Brett Drewitt has a 66, Queenslander Jun Seok Lee a 65 and the @PGAofAustralia leaderboard is tightening right up at @VicOpenGolf
Feb. 21, 2014

The wind has picked up a little more this afternoon and Terry Pilkadaris and Andrew Kelly remain tied for the lead at 4-under par.

A shot back Brett Drewitt, David Bransdon and Rohan Blizard are out on course at 3-under par while Kim Felton, Matt Stieger and Jun Seok Lee are in the clubhouse at 2-under par.

Some great crowds are out at 13th Beach Golf Links supporting the vent today with sizeable galleries following both the men’s and women’s events.

At this stage the cut is looking likely to be made at 3-over par, with some interesting names on the wrong side of the number including Jarrod Lyle (still out on course), Gareth Paddison , Jack Wilson, Nathan Holman and Jin Jeong.

Matt O'Leary
@MattOleary88
@PGAofAustralia Dan Nisbet with the ALBATROSS! On the 2nd #VicOpen needs a couple more birdies to scrape in under the cut!
Feb. 21, 2014 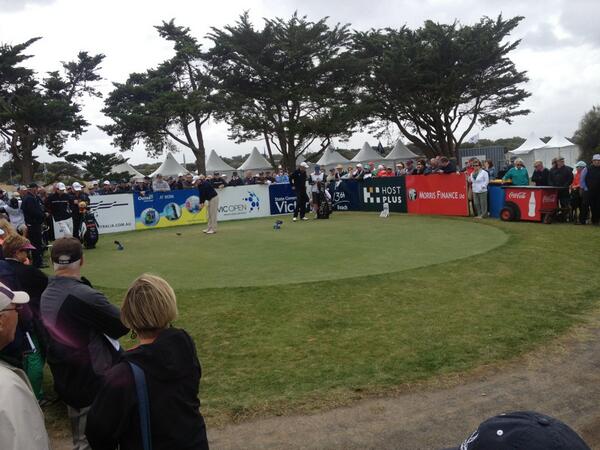 While he still holds a two-shot lead, Terry Pilkadaris has mixed emotions after his round ruing a missed opportunity on 17.

Pilks three-putted 17 leaving undoing his otherwise solid round, but he was happy to finish with a good par on 18 to finish at 4-under par.

“The wind is picking up now – it’s getting gusty again,” said Terry who is doubtful he’ll be holding on to the top spot by the end of the day.

“Someone’s going to light it up, it just depends on the weather. But that’s out of my control."

“We’re back on the beach course tomorrow so I’m more familiar with that,” he added admitting he’s excited about his chances on the weekend.

“You’re always going to get a little tingle – nerves are a good thing, but you just get up and go. That’s golf.”

Below is a snapshot of the current leaderboard...

Friday 21st February 11.40am
How's this for a scorecard? Callan O'Reilly is on fire and now in second position!

With three holes to play Terry Pilkadaris has maintained his three shot lead over the Oates Vic Open field and has built a good leadas the wind picks up slightly.

Marcus Both has improved his overall position and moved into a tie for second positoin as has Peter Wilson.

Aaron Townsend is stil struggling to overcome his early mistakes and remains at 2-under.

Terry Pilkadaris is the new Oates Vic Open outright leader finishing his front nine at 3-under par to sit at 5-under total.

With a great eagle on the 6th, Pilks’ lead temporarily went out to four shots, however he bogeyed the par-3 7th bringing his score back to 5-under.

Overnight leader Aaron Townsend has also experienced mixed fortune on Friday morning, the Novocastrian bogeying both the 3rd and 4th holes before eagling the par-5 5th. Aaron’s currently 1-over for the day at 2-under par. 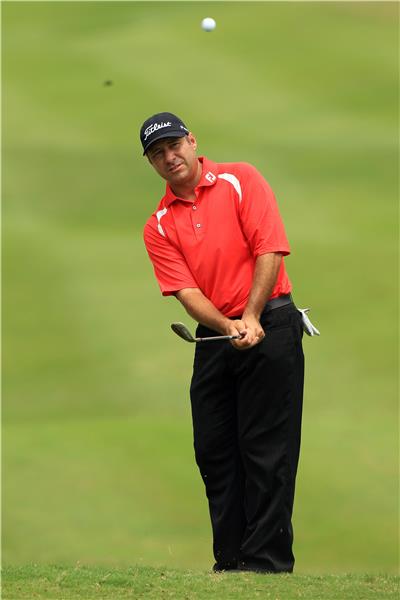 The eagles aren't restricted to our leaders however, Marcus Both also making the most of the morning conditions to get back to even par.

In the Women's event, Sarah-Jane Smith has picked up where she left off yesterday...

Victorian Open
@VicOpenGolf
@SarahJaneGolf birdied her first 2 holes this morning. She is now at -7 for the tournament. @ALPGtour #OatesVicOpen
Feb. 21, 2014

Terry Pilkadaris is wasting no time in making the most of the early conditions this morning and has birdied the Creek Course second hole to take a share of the Oates Vic Open lead early on Friday.

Terry has been playing consistent golf over the last few weeks on the PGA Tour of Australasia and said yesterday that he’s been making changes to the mental part of his game that he felt let him down last season.

Last year Pilkadaris struggled for consistency at home in Aus only making one top 10 – at this very event, the Vic Open.

His best finish in one of the “big” PGA Tour of Australasia events in 2013 was T34 at the Australian Masters at Royal Melbourne.

Plenty would love to see Terry kick on this week and get his season off to a strong start.

If you're haping to catch up on all the action from the Women's Vic Open, start by reading this great overview of Sarah-Jane Smith's great Round 1 from the Geelong Advertiser.

"THERE are rounds of five under par; then there is the five under with which Sarah Jane Smith overpowered Thirteenth Beach.

As all around her — in both men’s and women’s Vic Open fields — flailed in the savage winds, the softly spoken Queenslander was a beacon of pure quality.

Her 69 won’t stand as a Beach Course record, but it’s a score in winds gusting 40-50km/h that deserves equal billing." 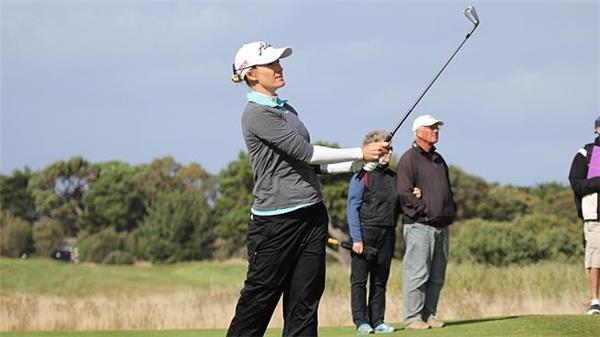 With players switching courses for Round 2, hole locations remain the same as yesterday. 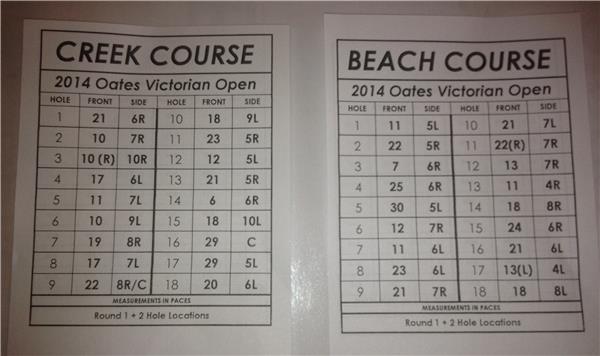 Welcome back to 13th Beach Golf Links for Round 2 of the Oates Vic Open!

It looks like the players will get a reprieve from the wind this morning, however it may pick up slightly by the afternoon. Bu all in all, much more convenient conditions for day 2.

Play will get back underway this morning from 7.30am, with some good groups out early.

Tied for second, Terry Pilkadaris is in one of the first groups off on the Creek Course this morning at 7.30am, while overnight leader Aaron Townsend will likewise play the Creek Course at 8.10am.

If you missed yesterday’s play, you can also read the Round 1 wrap here or catch up with the Round 1 State of Play.