Bringing you updates from #VICPGA at Heritage Golf & Country Club as they happen.

Round one by the numbers:

5         The number of countries represented at the Vic PGA

Heritage Golf & CC
@HGCCGolf
The weather wasn't the only thing that was hot.... scores too!!! #VicPGA pic.twitter.com/xXBcFrwSsQ 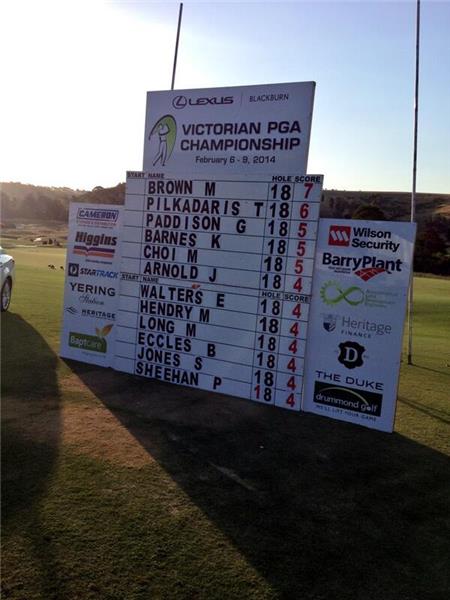 "It’s a good track, its reasonably generous off the tee and the greens are perfect," Mark Brown.

Terry Pilkadaris has made the turn bogey free and is 5-under the card. He is now T2 with Kurt Barnes who played in the morning field.

Also charging up the leaderboard is New Zealander Gareth Paddison. He is 4-under after 9 holes and aiming to win his second Victorian PGA Championship. He won his first in 2012 when it was played at Forest Resort Creswick.

Michael Choi continues to make the most of his home course advantage and is now 3-under after six holes.

Currently there are 72 players at par or better.

David Bransdon is continuing his love affair with the Heritage Golf and Country Club. He is 3-under after nine holes on the St John layout of which he holds the course record.

Bransdon is T7 with Terry Pilkadaris, Michael Long and Ryan Haller who are all still on course.

Amateur Zach Murray has finished his first round in a PGA Tour of Australasia tournament and is also T7 3-under 69. He is currently the leading amateur in the field.

The Heritage Golf and Country Club is the home course of Ryan Lynch and Michael Choi who are both 3-under the card and playing in the afternoon field.

Playing his first PGA Tour of Australasia tournament in 12 months, Paul Sheehan is 2-under after 9 holes.

As the temperature soars about 30 degrees at the Heritage Golf and Country Club the scoring has slowed down.

Of the afternoon field Matthew Millar, Ryan Haller and Michael Long are the best performers so far. The trio are sitting in a share of 14th on 2-under the card.

On the same side of the course the par-5 9th is playing the easiest with 33 players making birdie and three walking away with an eagle.

As the morning field is starting to come off the course it’s Mark Brown who leads the tournament. He fired an impressive 7-under 65 while his playing partner and fellow Kiwi Mike Hendry fired a 4-under 68 to be T3. Joining Hendry is Euan Walters and Steve Jones.

At 5-under 67 Kurt Barnes is outright second and spent the day on course with Essendon Midfielder Brendon Goddard.

Daniel Popovic, who is playing his home course and his playing partner Matt Griffin, who is coming back after a wrist injury both had solid rounds of 3-under 69. They are T6 with six other players.

It’s really starting to heat up out here at the Heritage Golf and Country Club so hydration will be key for the afternoon field.

With just three holes to play Mark Brown is just one shot away from equalling the course record here at the Heritage Golf and Country Club.

He is 7-under and has a three shot lead.

While live scoring on our website is experiencing some issues, scores are working on the iPhone app. 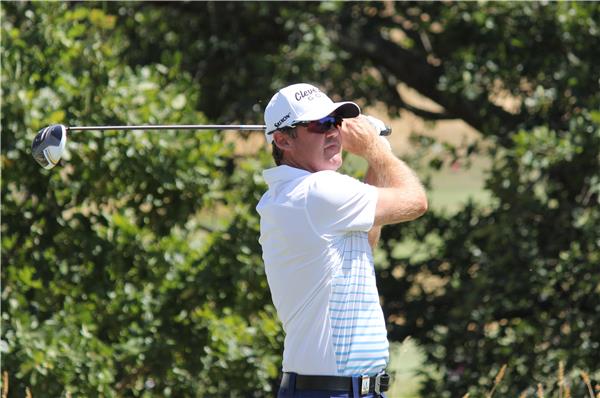 At 5-under the card after 9 holes, Brown is well placed to equal or better the St John course record which was set at 8-under 64 by David Bransdon last year in the first round of the Lexus of Blackburn Heritage Classic.

Big hitting Kurt Barnes has bounced back from an opening bogey with consecutive birdies on the 13th, 14th and 15th.

Players are taking advantage of the early scoring conditions at the Heritage Golf and Country Club with plenty of birdies already being made.

Playing out the 2013 season with a wrist injury, Matthew Griffin underwent surgery in the off season but looks to be in excellent form. The Lexus of Blackburn Victorian PGA Championship is his first tournament back and he is co-leading on 3-under after six holes.

Joining Griffin is New Zealander Mark Brown. He is picking up where he left off at the Emirates Australian Open where he finished T6 at the end of 2013. Brown will be pleased with his form as he looks forward to the New Zealand Open which will be played at the end of this month.

Also joining the lead is Daniel Fox who will be aiming for a solid 2014. The West Australian struggled in 2013 making the cut in less than half the tournaments he played on the PGA Tour of Australasia and failed to retain his card. Heading back to Qualifying School Fox regained his card and looks to be making the most of his opportunities today.

The Lexus of Blackburn Victorian PGA Championship is underway in beautiful morning conditions.

A host of players including Peter Cooke, Daniel Fox, Matthew Griffin and Jack Wilson are off to a nice start and are 1-under the card.

Former Australian PGA Champion Daniel Popovic is starting his 2014 season at his home course, the Heritage Golf and Country Club. He is utilising his local knowledge to also be 1-under the card.

With the first two rounds being played in a pro-am format there were a few nervous amateurs on the first tee but not Essendon footballer Brendon Goddard. Playing off scratch Goddard was willing to tee off the black makers but went to the forward tees and opened with a par. He is playing in a group with Jack Wilson and Kurt Barnes.

Off to a tough start is Adam Wilcox who has opened with a double bogey followed by two bogeys to be 4-over after three holes.

The next group due on the 1st tee is Edward Stedman, Blake Proverbs and Luke Humphries. While on the 10th tee Wayne Perske, Lucas Herbert (am) and Jamie Arnold are all about to get their rounds underway.

For live scores please click here. Please note that scoring is being done every three holes.