Round 4 State of Play Live

For live updates on today's play head to live.pga.org.au where blogging will start at 11am (AEST).

Adam Scott went close to bagging a freakish albatross double as he turned the final nine holes of the $1.25 million Australian PGA Championship at RACV Royal Pines into a “master class” on a wet Sunday afternoon on the Gold Coast.

Scott claimed the Joe Kirkwood Cup by four shots, closing with a final round of 67 for a 72 hole total of 270.

American Ricky Fowler, who opened the tournament with a course record 63 on Thursday, finished with a 68, beating 23 year-old Victorian trainee Jack Wilson (68-71-69-68) who savoured his biggest pay day banking $84,375.

Wilson also collected the Kel Nagle Plate as the leading rookie of the tournament.

He three putted for a double bogey.

“The rain delay stunted my momentum,” said Wilson who hung tough over the last four holes.

Scott (-10) was just one shot ahead of Wilson and Fowler when a lightning storm forced him and the rest of the field from the course for 90 minutes.

Before the delay, the 33 year-old Queenslander, who created history at Augusta in April, had looked a little pedestrian.

But with the tournament on the line, as champions do, he produced two magnificent long approach irons, the first, a 4-iron into the 508m par five 12th and a 7 iron second shot to the 515m par five 15th .

Both shots looked a chance of going in the hole for albatrosses.

It quickly became shut the gate as Scott nailed his eagle at 12 and then a tap-in birdie at 15 to become only the sixth player to win Australian golf’s Triple Crown of majors following in the spikes of Greg Norman, Peter Senior, Craig Parry, Peter Lonard and Robert Allenby.

Scott was very emotional at the presentation.

“This is the one I desperately wanted. It’s the icing on an incredible year,” he told fans surrounding the 18th green for the presentation of the Kirkwood Cup.

“To come home and play in front of my Queensland family meant a lot.

“I’ve had a great week. This one is for my family, especially  my dad (Phil) who is a PGA member.

Scott also made the point of thanking Fowler for coming out and playing in Australia.

An eagle after narrowly missing a rare Albatros has sparked Adam Scott’s bid to win the Australian PGA Championship at the RACV Royal Pines Resort on the Gold Coast.

After a 90 minute weather delay, Scott, -13, has increased his lead from one shot to four shots over American Rickie Fowler (-9) and Victorian trainee Jack Wilson (-8) with a handful of holes remaining.

Wilson returned to the course and had a double bogey out of a wet bunker to drop off the pace.

Cameron Percy is the only other player in the picture but was only -7 with one hole to complete.

Scott’s 220m second shot approach to the 508m par five 12th hole looked for a moment as if it could roll into the cup only to slip past the hole.

Sunday November 10 - 1:50pmPlay has been suspended because of bad weather closing in on the Royal Pines golf course on the Gold Coast during the final round of the Australian PGA Championship. 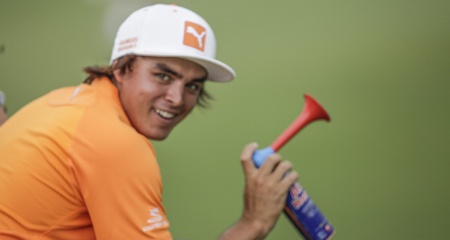 When the warning siren was sounded, Adam Scott was leading on -10 through 11 holes -- one shot ahead of surprise packet Jack Wilson (-9) and American Ricky Folwer (-9).

Cameron Percy was the next best placed on -6 one ahead of Jason Norris, one of five players bunched on -5.

US Masters champion Adam Scott has grabbed his first birdie midway through his final round of the Australian PGA Championship at RACV RoyalPines.

After seven straight pars, Scott knocked his approach to the 344m par 4 eighth hole to a metre to move to -11.

American Ricky Fowler also birdied the eighth to stay within two shots of Scott with young Victorian trainee Jack Wilson one shot further back on -8.

Kiwi leftie Gareth Paddison was not out of the hunt at -7 through 11 holes while Jason Norris was enjoying a great closing round and was four under towards the end of his round and -5 for the tournament.

Things may get interesting later in the day with a storm forecast to hit the Gold Coast area.

Scott remains at -10 through four holes but Wilson (-8) has moved past American Rickie Fowler (-7) with his eye-catching start.

He put himself in contention with a solid third round 69 to be within five shots of Scott before declaring: “I’m not here to finish second”.

Kiwi left-hander Gareth Paddison and Michael Wright were both -6.

Veteran Tasmania Matthew Goggin is another mover with four birdies to break into the top 10 at -5 through 14 holes.

American Rickie Fowler has made his intentions known early on the final day of the Australian PGA Championship, cutting Adam Scott’s overnight lead to two shots with a birdie on his opening hole at Royal Pines.

Scott opened his final round with a regulation par before Folwer dropped a four metre birdie to move to -8 and two behind Scott.

Scott (67-67-71) at -10 will carry a three shot lead into Sunday’s final round of the $1.25 million Australian PGA Championship presented by Coca Cola with Fowler (63-72-71) hoping to run him down for his first victory Down Under.

The stage is set for a thrilling final day’s action with Victorian journeyman David McKenzie (65-69-72) on -7 with Fowler.

Also in the mix are Michael Wright, who’s third round 68 lifted him to -6 along with Gold Coast-based professional Steven Jeffress (-6).

The weather forecast is for a top temperature of 29 degrees with north-to-north-west wins between 15 to 30 knots.

Wayne Heming is a respected journalist who has covered major sporting events in Australia and overseas for more than 40 years.