Round 2 State of Play Live

For live updates on today's play head to live.pga.org.au where blogging will start at 11am (AEST).

Hot favourite Adam Scott was on top of the Australian PGA Championship leader board after 36 holes after his chasers -- , including classy young American Ricky Fowler -- struggled to cope with the afternoon winds.

On a day dedicated to Scott’s US Masters victory, fans and players wore green as the 33 year-old Queenslander came from two behind at the start of the day to finish with a two shot lead (65-67) on -10 at the halfway mark.

The challengers just failed to materialise.

Overnight leader Rickie Fowler – so good blazing out a record 63 on Thursday -- struggled with the conditions after opening his round with a spectacular eagle and momentarily joining Scott in the lead.

It was a strange day.

Players threatened to charge but stalled.

In the end, Scott, who admitted to backing off the throttle mid-round rather than risk making mistakes in the toughening conditions, was in the position most expected him to be.

He wants to win the PGA Championship. He’s won the Australian Open and Masters but he wants this title more and he is very focussed despite all the distractions that come with being a major winner.

American visitor Rickie Fowler is doing his best to keep in touch with clubhouse leader Adam Scott towards the end of his second round of the Australian PGA Championship at RACV Royal Pines Resort.

Fowler opened his chase with a spectacular eagle, holing out from the fairway at the first after Scott had completed his round of 67 to take the outright lead at -10.

But Fowler struggled to keep his round together dropping shots at the 4th, 8th and 12th holes to slip back to -7.

He got back on track with his first birdie of the round of the 515m par five 15th hole to get back within two of Scott.

Players found it difficult to charge despite the ideal conditions for low scoring.

Even Scott reined himself back over his last 9 holes to avoid a mini collapse, happy to be in double figures heading into the weekend.

Scott’s modest 67 was surprisingly the best round of the day along with Jason Scrivener and Adam Crawford who also had four under rounds.

Players have struggled to move up the Australian PGA Championship leaderboard despite ideal second round conditions at Royal Pines on the Gold Coast on Friday.

American Rickie Fowler gave promise of lighting up the course after holing out for eagle on the first hole.

But the overnight leader dropped two shots at the 4th and 8th holes to remain at -8 for the tournament midway through his round.

He momentarily had a share of the lead with Scott whose second round 67 moved him into the clubhouse lead on -10.

Scott’s every shot was cheered by a Sunday-like gallery decked out in green in recognition of the 33 year-old Queenslander’s US Masters win at Augusta in April.

Scott, who opened with a six under 65 on Thursday, would not expect to be sitting on top of the leaderboard at the end of the day with such a modest 36 hole total.

But with a lack of chasers emerging from the pack he could head into the weekend with a lead or at least of a share it.

The ideal scenario would be for Scott and Fowler to play together over the weekend which looks a real possibility.

American Rickie Fowler has blown a sensational eagle-start to his second round of the PGA Championship at Royal Pines with two front nine bogies.

After a flawless eight-under 63 on Tuesday, the colourful Fowler holed his approach shot to the 430m par four first hole for eagle and a share of the tournament lead with Adam Scott who added a 67- to his opening 65 to be the clubhouse leader at -10. 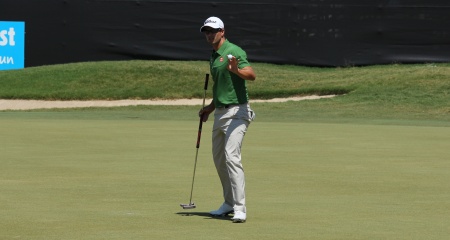 Fowler, who started the day at -8 took one hole to catch Scott with his eagle shooting him to -10 but costly slips at the 4th and 8th holes have seen him drop back to third.

Victorian David McKenzie continued his consistent form with a second round 69 after Thursday’s 65 to be in second place on -8.

The best round of the day so far has been a 67 by 24 year-old Jason Scrivener who was -5 for the tournament.

Adam Scott played the final nine holes of his second round conservatively on Friday to make sure he wasn’t “too far back” heading into the weekend rounds of the Australian PGA Championship at RACV Royal Pines.

On a day when golf fans decked themselves out in green in his honour, Scott started with a birdie-eagle, signalling to his green army they could be about to witness a special round from the US Masters champion.

Scott though, managed just one more birdie from the next 15 holes, adding a 67 to Thursday’s opening 65 to be -10 for the tournament after 36 holes.

He then thrilled his horde of fans stretching 100 metres, signing autographs and having his picture taken for 30 minutes in his green Masters jacket.
"It was nice to see everyone out there in green today and nice the the PGA wanted to make today a green day and that everyone embraced it, even the players," said Scott.
"I was really special to me that my peers would do that."
"It's nice that they would enjoy seeing an Aussie win the Masters."

American Rickie Fowler, the overnight leader after a blazing his way to an eight-under 63 Thursday, holed his approach shot to the first green for an eagle to join Scott at the top of the leaderboard on -10.

The young American however handed a shot back at the 450m par 4 fourth hole to drop a shot off the pace.

Adam Scott has thrilled his green gallery with some superb golf on a day dedicated to the US Masters champion at Royal Pines.

Fans turned out in force decked out in green to support “Green for Adam Scott Day” and the 33 year-old Queenslander didn’t disappoint them, starting his round with a second hole birdie followed by an eagle to the roars of the big crowd.

Spectators turned up in green shirts, pants and hats, some with their faces painted, even with their hair sprayed green.

Scott’s early charge pushed him past overnight leader Rickie Fowler to -9 and with another birdie early on in his homeward nine he is -10 and four holes to play.

David McKenzie picked up two shots after yesterday's 65 to move -8 while Kiwi Josh Geary was enjoying a nice round  with four birdies to climb the leaderboard at -7.

----------
Friday November 8 - 10.00am- State of PlayAdam Scott has turned “Green for Adam Day” into “Red for birdie Day” surging into the lead early on the second day of the Australian PGA Championship at Royal Pines.After opening with a controlled 65 on Thursday, Scott had a birdie-eagle start to his second round to jump to nine under.Tracked around the course by a huge gallery Scott made the turn in 33 finishing his nine with six straight birdies.He leads Victorian David McKenzie  -8 by a shot with overnight leader, American Rickie Fowler yet to hit off after yesterday’s best round of 63 – a course record.Gold Coast based Steven Jeffress, who qualified for this year’s British Open, was enjoying a good round moving to -7 for the tournament after picking up four shots in his front nine on Friday morning.----------