Round 1 State of Play Live

American Rickie Fowler has defied all challengers to knock off his sizzling eight-under opening round 63 to take first day honours in the 2013 Australian PGA Championship at RACV Royal Pines on the Gold Coast.

While several groups remain on the course, Fowler ‘s flawless round appears untouchable, even for US Masters champion Adam Scott who was four under through 14 holes.

Scott ignited a mid-round charge with a hat-trick of birdies at  6-7-8 but then his assault stalled.

Journeyman David McKenzie was -7 playing the 18th hole but scratched out a bogey to slip back to 65, two behind Fowler and level with Gold Coast pro Matthew Ballard.

Jason Norris, who has nightmares every time he comes to Queensland after a bad bike accident in 2007 and a bout of viral meningitis earlier this year after shooting a first round 60 in the Queensland PGA, carded a solid 67.

Adam Scott is on the charge with a hat-trick of birdies in his chase to run down hot-handed American Rickie Fowler on day one of the Australian PGA Championship at RACV Royal Pines on Thursday.

Fowler set a sizzling opening day’s pace with a flawless eight-under 63 in near perfect scoring conditions before Scott took to the Gold Coast course.

The US Masters champion opened his round with five straight pars before claiming his first birdie at the 345m par four 6th hole.

He followed up with a spectacular approach to the long 405 metre 7th hole to within a metre of the pin before moving ominously to three under with his third birdie of his round from two metres at the eighth hole.

Local Gold Coast pro Matthew Ballard got within one shot of Fowler late in his round before finishing with a six under 65.

Newcastle’s Nathan Green was rock solid opening with a five-under 68.

Korean Sung-Yeol Kwon is setting a hot early tempo on day one of the Australian PGA Championship at RACV Royal Pines leading the field on five under par.

Kwon made the turn in 31 with four birdies before moving to -5 with another at the 348m par four 10th hole.

His nearest rival is 28 year-old Canadian visitor Ryan Yip on four under through his opening eight holes.

Yip, who has two professional wins on the Canadian Tour, birdied five of his first eight holes on the back nine but surrendered a shot on the 202m par 3 third 16th hole.

American star Rickie Fowler, one of the players tipped to push Adam Scott on the weekend,  has negotiated his opening nine holes in two under.

His playing partner Marc Leishman made the turn at -3, to be just two shots behind pacesetter Kwon.

Leishman almost holed his approach shot to the ninth for an eagle only to miss his two metre birdie putt.

All eyes will be on US Masters winner Scott when he takes to the fairway at 12.20pm (Queesland time).

The PGA Championship at RACV Royal Pines is already living up to its promotional theme of “Light up the Gold Coast” with the early starters quickly getting amongst the birdies. 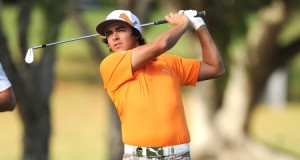 Canadian visitor Richard Lee has taken full advantage of the calm early conditions under clear blue skies to be the joint early leader on three under through his first eight holes.

Peter Lonard — chasing a fourth PGA title — has started well with two birdies in four holes to be one shot off the pace with Gold Coast veteran and three-time PGA champion Peter Senior one under par early.